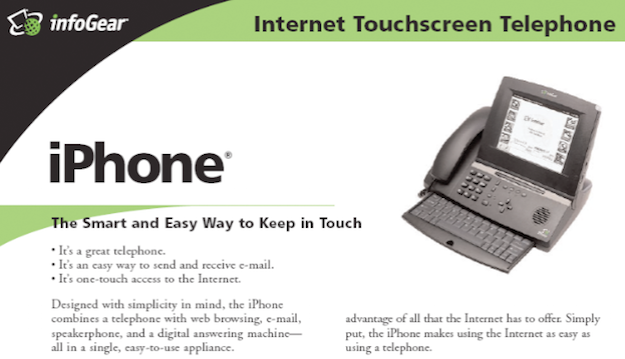 Though Apple popularized the ‘i’ prefix as it pertains to product branding, they weren’t the first company to release a product called the iPhone. Indeed, it’s easy to forget that when Steve Jobs first unveiled the company’s iconic smartphone back in 2007, the ‘iPhone’ trademark at the time actually belonged to Cisco.

With this as a backdrop, the Internet History Podcast recently took a look back at the original iPhone, a product which, believe it or not, Infogear launched all the way back in 1998, a good nine years before Jobs shocked the world with Apple’s own take on what a smartphone should be. Infogear was subsequently acquired by Cisco which is where Apple and Cisco’s trademark dispute originated from.

In the photo above, we see the first Infogear iPhone, nothing more than your basic touchscreen telephone. Following Cisco’s acquisition of Infogear, the networking behemoth stopped releasing products with the iPhone title in 2001, though it still retained the trademark.

Here’s a color version of the same photo. Just your classic white iPhone.

Of course, subsequent iPhone models in the pre-Apple days inevitably got noticeably thinner.

This is a photo Cisco used as evidence during their brief trademark dispute with Apple. They presented it as proof that they were still actively using the trademark.

And one more photo for good measure.

Of course, Apple and Cisco famously settled their dispute with both companies promising to explore new joint ventures together, a promise which, 8 years later, was never actually fulfilled.