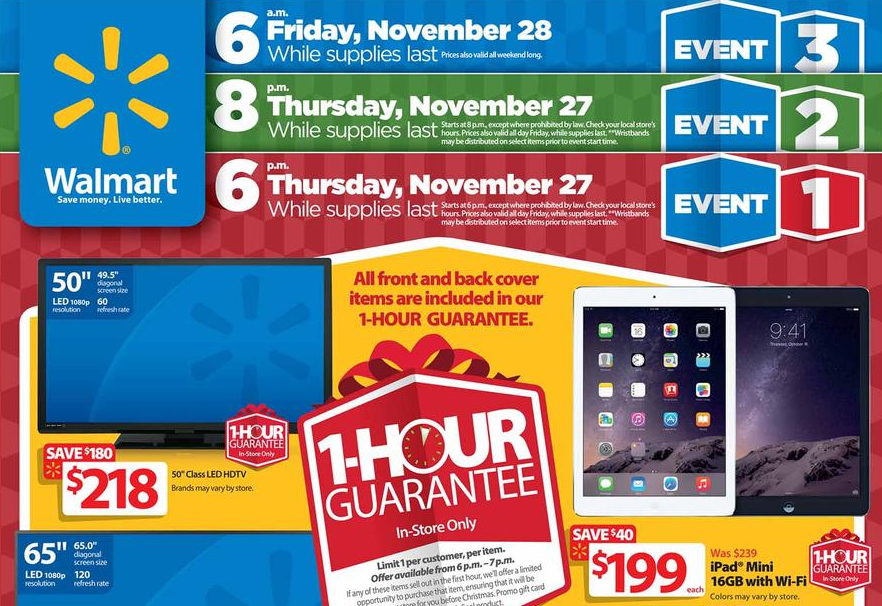 After the Black Friday 2014 ads for Best Buy, Target and Microsoft have already been revealed, Walmart’s full sales offer for this hotly anticipated shopping day has also been made available, with BFAds already having obtained a copy of it.

FROM EARLIER: Here is everything on sale at Best Buy for Black Friday

Walmart’s Black Friday sales will begin at 6:00 p.m. on Thanksgiving Day, with a second round of doorbusters set to start at 8:00 p.m. on the same day. On Friday, Walmart stores will open at 6:00 a.m., two hours earlier than last year, for the third phase of its huge Black Friday sale.

Unsurprisingly, there are many electronic devices and other gadgets included in Walmart’s Black Friday promotion, though interested buyers should check the full 40-page Walmart ad (available at the source link below) to see exactly at what time their chosen gadget will be available at a discounted price.

Here are some of the best tech deals Walmart is offering on Black Friday this year:

UPDATE: Walmart told BGR in a statement that Black Friday deals begin online Thanksgiving morning, with in-store events starting only at 6:00 p.m. on the same day. Furthermore, the retail chain added that most stores operate 24 hours a day, so they’ll be already open at 6:00 a.m. on Black Friday, which is when Black Friday deals for that day begin.