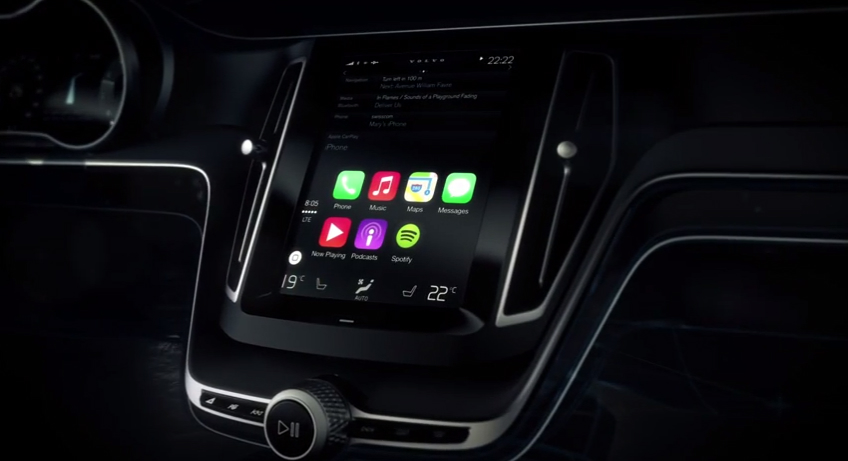 Volvo on Monday posted a short teaser video in which it demos the user interface of Apple’s newly launched CarPlay iOS feature that will let drivers connect their iPhones to upcoming car models and control them via touch and/or voice while driving. CarPlay is fully integrated in Volvo’s new UI for upcoming models, offering users access to a UI that’s similar to the iPhone’s UI, on a touchscreen console placed in the middle of the dashboard.

Default iOS Apple apps including Phone, Messages, Maps and Music are present on the dashboard right next to apps that are user-downloadable on the iPhone, such as Spotify. The CarPlay UI seamlessly integrates with Volvo’s own UI for its upcoming cars, Volvo says. The company has also posted on YouTube a video showing its touchscreen UI for the Volvo Concept Estate meant to help the driver better customize car settings. Apparently, Volvo’s own UI will also offer some feature similar to CarPlay, including navigation, but it’s not clear what operating system Volvo’s car OS is based on.

CarPlay will be available in future Volvo models starting with the XC90 SUV 2014 model. “Apple’s clean and intuitive user interface is a perfect match with Volvo’s Scandinavian Design approach and our focus on fluid functionality,” Volvo Car Group president and CEO Håkan Samuelsson said. “iPhone users will feel completely at home in a new Volvo. We have created a wholly-integrated user experience in our large portrait-oriented touch screen that takes the in-car mobile device experience to a new level. That, coupled with the obvious driver safety benefits of an advanced voice control system like Siri, made Apple a perfect match for Volvo.”

The iPhone will be connected to the car via a Lightning cable, although wireless connections will be possible as well in the future.

In addition to Volvo, Apple has also named Mercedez-Benz and Ferrari as launch partners, listing a variety of other carmakers in its CarPlay press release.

The Volvo videos that show off CarPlay’s and the company’s own UI follow below.