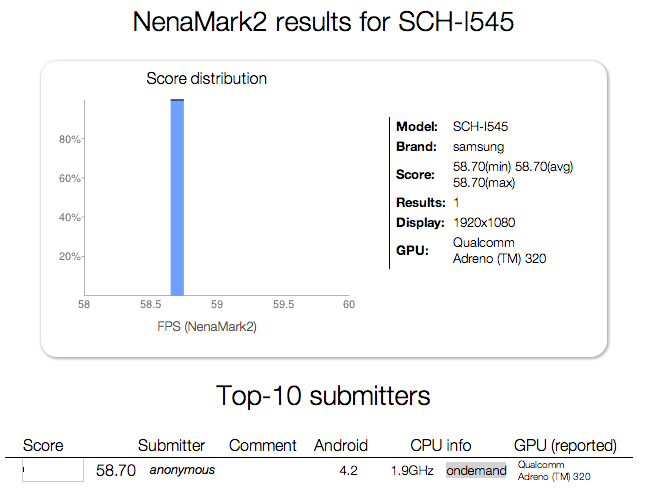 Samsung’s (005930) upcoming Galaxy S IV smartphone for Verizon (VZ) may have been detailed in newly discovered benchmark test results. The device carries the model number SCH-i545 and is similar to the model number SCH-i535, which is found on the carrier’s Galaxy S III smartphone. According to results from the Nenamark benchmark site, the Galaxy S IV will be equipped with a 1920 x 1080-pixel full-HD display, a 1.9GHz quad-core processor and Android 4.2 Jelly Bean. The specs match up to earlier rumors, however there are some discrepancies.

The benchmarks reveal that the device will include Adreno 320 graphics, which means that the processor could be a Qualcomm (QCOM) Snapdragon CPU rather than Samsung’s new Exnyos 5 Octa. The company has previously turned to Qualcomm for processors in its U.S. Galaxy S III models and could very well do the same for the Galaxy S IV.

The Galaxy S IV is expected to be announced on March 15th.