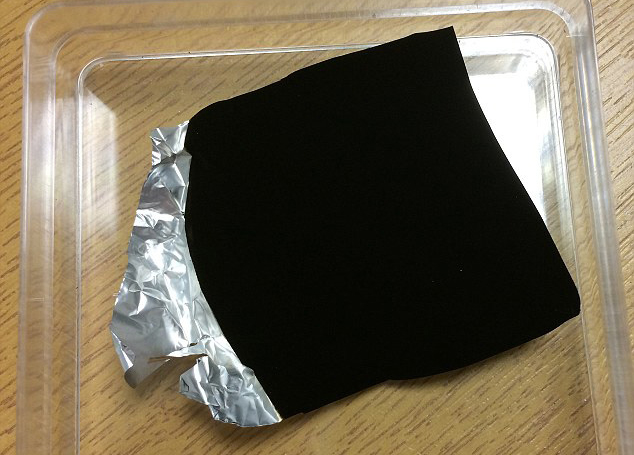 Coating objects with a layer so black it makes them look like flat holes in reality is potentially important for developing stealth weapons. But we all know the coolest implementation would be an iPhone that would look like a black splotch on the table.

We are now a step closer to this reality, as British scientists have developed a new material called Vantablack.

Vantablack absorbs 99.965% of light, erasing any three-dimensional features of objects it coats. Vanta is short for “Vertically Aligned Carbon Nanotube Alloys,” and the principle here resembles sound-dampening rooms with foam spikes sticking out of walls and ceilings.

The scientists behind the project have demonstrated Vantablack properties with a nifty trick — by coating a crinkly sheet of aluminum foil with the substance. The black part of the foil looks like a flat, dark patch. All dimensionality is lost in the light-absorbing nanotubelage.

Weirdly enough, the company behind the substance is based in Surrey and even carries the name Surrey NanoSystems. Crucially, the new substance has low levels of outgassing and particle fallout, problems that have plagued previous similar projects and prevented their commercial utilization.

Vantablack could change the ways sensitive imaging systems are manufactured; the problem of reflected light inside imaging devices is a major hurdle for developing more sensitive telescopes, for example. Its thermal stability and ability to withstand vibration makes it a plausible candidate for constructing telescopes launched to orbit to survey distant galaxies.

..or for a material to cover the iPhone 11 that can handle being left on a car dashboard on a hot afternoon.

A video showing off Vantablack follows below.