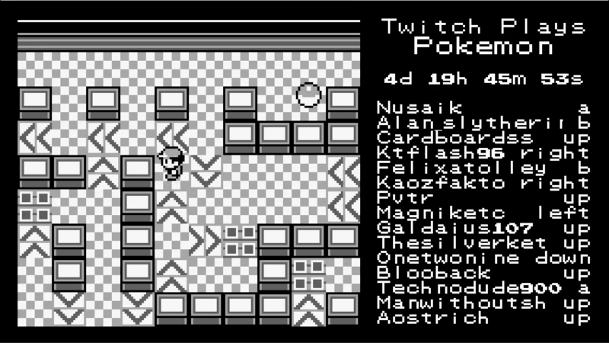 The streaming platform popular enough to beat Facebook during peak traffic hours is currently playing host to one of the most ridiculous and entertaining events in its relatively short history. As of this writing, 72,000 Twitch viewers are currently participating in an interactive playthrough of the first Gameboy Pokemon game by entering commands into chat. TwitchPlaysPokemon, as the channel is called, has been running for nearly 5 straight days, increasing its traffic to the point of dominating the top spot on the site consistently.

According to the FAQ below the video, “TwitchPlaysPokemon is a social experiment, it is a stream of the Gameboy version of Pokemon Red (151 romhack) running on an emulator. An IRC bot translates buttons said in chat into keypresses (simulated in software, no fancy typist robots).”

The creator hopes to bring more interactive experiences to Twitch in the future, but for now, head over to Twitch and marvel at the lunacy of the most confusing session of Pokemon ever played. If you’re feeling especially chaotic, create an account and join in the fun yourself.