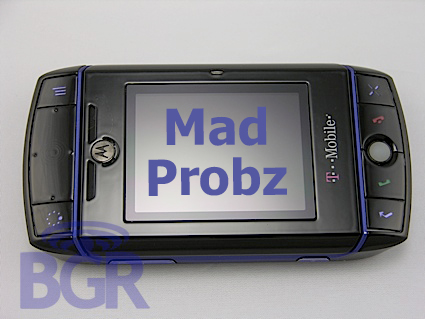 If you went out and bought yourself a brand new Motorola-manufactured Sidekick Slide, you might have noticed a problem — when you flip the screen up and down a couple times, the unit loses power — it restarts without notice. While this would be a major inconvenience just by itself, the new Sidekick Slide and Sidekick LX hard reset when the battery is pulled while the units are powered on. There lies the problem. Your unit effectively hard resets are random times. It could be in the middle of answering a phone call, sending an email or IM, or just about anything! All Sidekick data is stored on a back-end server, so if you don’t have service when that unit cuts back on, you are completely out of luck. Telstra recently launched the same device known as the hiptop slide, and our Aussie friends have alerted us to the same issue there! We love Moto’s take on the Sidekick, too. From the design, to the build quality and construction, but guys, you need to get your shizz together, ’cause this is crazy! In all fairness, we hit our Danger peeps and they are aware of the issue, so let’s see the next move that’s made. In the meantime, if your unit is experiencing these issues, it would be best to get it exchanged, though that might not do you any good as we’ve had 2 units personally and they both had the same problems. A quick fix would be to take a business card or folded up piece of paper and stick it in between the battery, and the battery cover, as it seems like it’s an issue with the battery and battery contacts. Sidekick Slide users, what are y’all seeing?