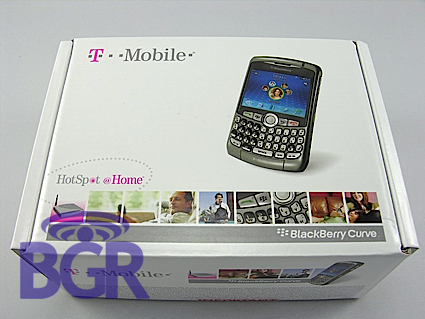 We’ve finally got a T-Mobile BlackBerry Curve 8320 in hand, and we’re giving you our own unboxing pictures. From what we can tell so far, the device feels a lot smoother, and we had no trouble connecting to our home Wi-Fi network right out of the box. UMA calls worked, but data does not until you setup and provision your BlackBerry account on T-Mobile’s network. Then, you will get the Wi-Fi service books. Since this is a totally hot anticipated device (look out your windows for T-Mobile lovers rioting in excitement), we’re giving one away! All you got to do, is leave a comment with why you love BGR, and we’ll pick a winner. Don’t forget to check out our very own unboxing pictures, too! Let the games begin!

UPDATE: The brand new BlackBerry 8320 is now fully unlocked courtesy of GSMPhoneSource. The giveaway is open to anyone worldwide!

Click on over to our T-Mobile BlackBerry Curve 8320 Unboxing Part 2 gallery!