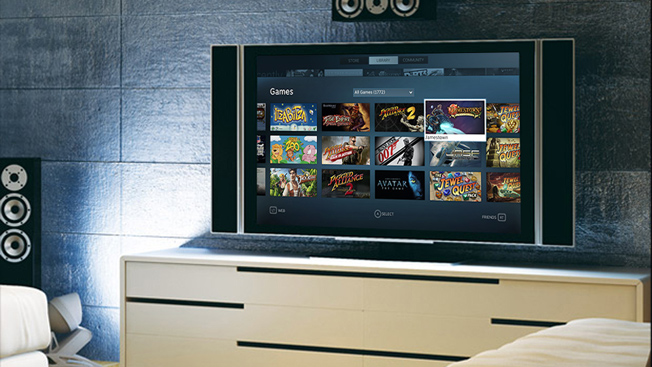 Valve on Monday announced the public release of the company’s Big Picture mode for its Steam software delivery platform. The new mode supports a traditional gamepad, along with a keyboard and mouse to give gamers access to their favorite titles and content right on their television sets. The Big Picture interface can be enabled on any TV by connecting a PC or Mac with an HDMI cable. To celebrate the launch, Valve is discounting over thirty controller-friendly games that will be on sale from now until December 10th. Big Picture mode is fully supported on 41 titles including Portal 2 and Left For Dead 2, and an additional 386 games are listed to include partial controller support, which will still require a traditional mouse and keyboard at certain times. Valve’s press release follows below.

December 3, 2012 — Valve today announced the public release of Big Picture, Steam’s new mode that lets gamers access all of their favorite Steam games on a television from the comfort of their sofa. Big Picture has been designed to be used with a traditional gamepad, while also fully supporting keyboard and mouse input.

To celebrate the public launch of Big Picture, over thirty controller-friendly games will be on sale from now until December 10, with savings up to 75% off.

Access to the complete Steam store is included, as is the Steam Community. Big Picture is available worldwide in over twenty languages, including German, French, Russian, Korean, and Portuguese.

Gamers’ existing games are all available in Big Picture. In addition to having the complete library of Steam games, each user’s cloud files, Steam Workshop content, account information and preferences will be accessible automatically in the new mode.

Steam gamers may easily experience Big Picture on their televisions by connecting their PC or Mac, typically with a single HDMI cable. Big Picture also includes a new web browser designed for televisions and game controllers. It is accessible from anywhere within the Big Picture UI, and even while playing Steam games on a TV. It supports Big Picture’s new method of typing with a gamepad, which is useful for entering URLs, filling out forms, chatting, and other functions.