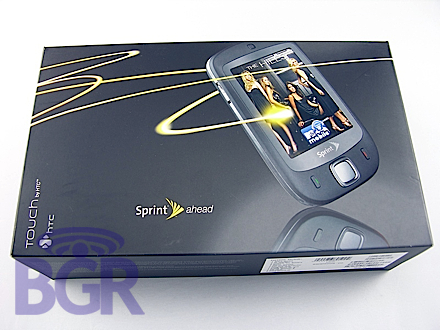 We hit up the original HTC Touch a few months back, and for the most part, our original conclusion still applies: Windows Mobile is not made for devices with no buttons. Just navigating around this thing is a chore sometimes, and while HTC has stepped it up by adding a “20 key” keyboard that works like T9, it’s definitely frustrating to do anything that requires more than 3 letters. In general, we don’t have a problem with the device when looked at physically. It’s just as small, feels good when your making a phone call, and is actually pretty zippy once you get passed the SureType / T9 gatekeeper. But there’s still a couple little annoyances that we can’t believe made it to the final version after this amount of time. Take this one for example: let’s say you go into Sprint TV. Ooooh! Nice! The screen rotates so you can watch TV in widescreen. Totally killer, dude! Yeah, why don’t you go exit the application and report back…”Uh, my screen never flipped back to portrait.” Exactly. Totally stupid oversight, here. To flip this and look at the positive side, voice quality sounded crystal clear on the handset, with even speakerphone showing off some great tones. The IM program on here, like almost other Mobile IM programs, doesn’t deliver for our freakish AIM needs, but if you’re just doing the quick chat, it might work. All in all, it has the Windows Mobile core that will sync right up to your Exchange server, do push email out of the box, IM, you can watch TV, take pictures with a 2 megapixel camera, etc. But we just know how to do half of that because navigating is so hard. As always, full snaps in the gallery below!

Click on over to our Sprint HTC Touch gallery!