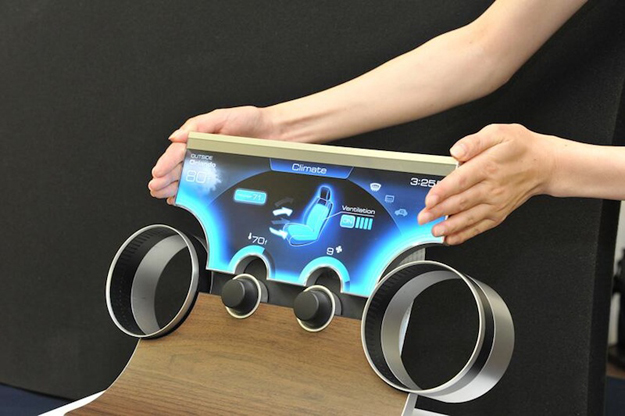 The future of consumer tech is not a rectangle, and Sharp just unveiled a major step toward realising that future. The company has unveiled new display technology it refers to as “Free-Form Display.” Using Sharp’s new tech, companies will be able to design and manufacture LCD displays in shapes that might have otherwise been impossible to mass produce.

“Conventional displays are rectangular because they require a minimal width for the bezel in order to accommodate the drive circuit, called the gate driver, around the perimeter of the screen’s display area,” Sharp said in a press release. “With the Free-Form Display, the gate driver’s function is dispersed throughout the pixels on the display area. This allows the bezel to be shrunk considerably, and it gives the freedom to design the LCD to match whatever shape the display area of the screen needs to be.”

The release continued, “For in-vehicle applications, for example, this development makes it possible to have a single instrument panel on the car dashboard that combines a speedometer and other monitors. There are other possibilities for displays with sophisticated designs: these include wearable devices with elliptical displays and digital signage and other large monitors that draw the viewer into the onscreen world.”

Sharp did not state when its new Free-Form Display tech will be ready to mass produce screens, stating only that it plans to open mass production “at the earliest possible date.”