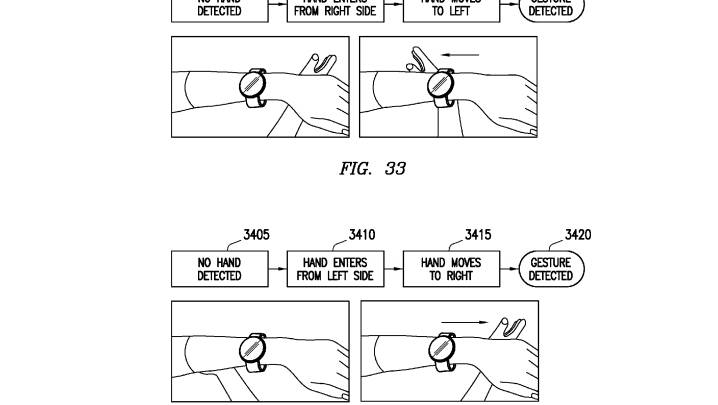 As smartwatches struggle to find their place in a saturated device market, vendors are looking for new ways to attract potential customers. Even executives are willing to admit that the current lineup hasn’t done much to impress consumers. The latest patent from Samsung imagines a new method of gesture controls for future smartwatches, using a built-in camera to track a user’s hand motions. These touchless gesture controls would allow users to point at and capture an image of an object, unlock the device or even to power it down.

The aforementioned camera would be situated a little further down the wristband than it was on the original Galaxy Gear in order to avoid any wrist strain while trying to capture an image or a gesture. Images from the patent show that Samsung wants the camera to recognize barcodes, images and objects as well as translate written text.

There’s plenty more where that came from — Samsung has also placed a round-faced display on its touch-free smartwatch, inching awfully close to the design of the Moto 360. Unlike the Moto 360, or any other Android Wear smartwatches announced so far, the watch face would be removable, giving users the option of placing the device on a keychain, a belt clip or a necklace.

Gesture controls could certainly solve the issue of limited display real estate on smartwatches, but would anyone actually use them? We’ll find out if Samsung ever decides to include this technology inside one of its devices.