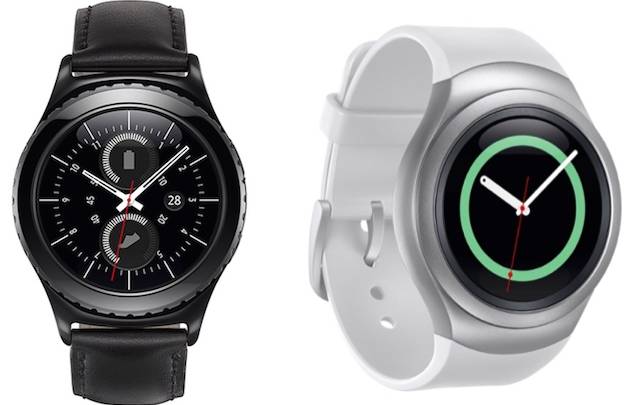 It’s hard to keep up with what Samsung is doing in the wearables space. In less than two years time, the company has released six, count em’ six!, different smartwatch models. On Monday, Samsung boosted that number to seven with the official unveiling of its Gear S2 smartwatch.

Samsung’s Gear S2 comes in distinct models: classic and standard. The classic model features a black casing with an accompanying black leather band while the standard model sports a dark grey casing with a somewhat lighter grey band. Both models feature a rotating bezel which can be used to navigate through system menus and interact with applications.

“The Gear S2 classic is made for users who prefer a more timeless watch design,” Samsung’s press release reads. The Gear S2, meanwhile, is targeted at users “who are on-the-go and have an admiration for minimal and modern design.”

With the Gear S2, Samsung is making a 3G option available for the standard model, thus allowing users to keep up with their email, voice calls, and other tasks without having to be tethered to a smartphone.

“Users can choose the Gear S2 with 3G connectivity which incorporates the first-ever e-SIM with voice capability,” the press release states.

Following Apple’s lead, the Gear S2 has a focus on personal fitness and can even support mobile payments.

New fitness functions on the Samsung Gear S2 will encourage consumers to stay healthy and active. The 24-hour activity log lets users view daily activity progress and patterns at a glance. It will also send reminder updates to motivate users to stay on track with their fitness goals.

For the ultimate convenience, the Samsung Gear S2 comes with NFC technology which will enable mobile payments without the need for a wallet. Samsung is working with a wide selection of partners across different industries to expand the usability of wearables and streamline consumers’ mobile lives in a variety of ways, including smart car keys, residential room keys, and remote controls to manage a connected home.

As far as specs go, the Gear S2 runs on Tizen and comes with a 1.2-inch, 302ppi AMOLED display, 4GB of storage, 512MB of RAM, a 1GHz processor, Wi-Fi, Bluethooth, and NFC functionality, and a heart rate sensor.

We don’t have any pricing or launch details just yet, but we’ll keep you posted once they’re made available.