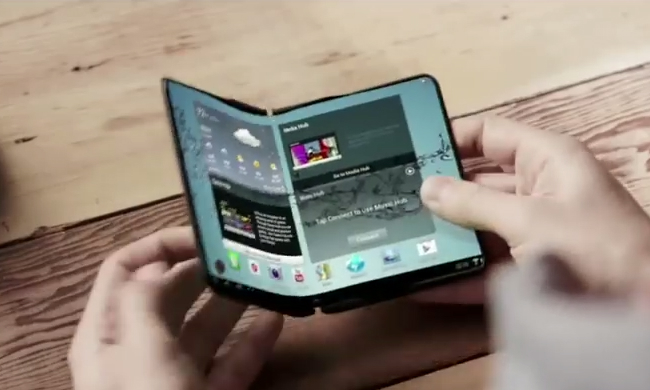 Samsung will reportedly demo a bendable tablet at MWC 2014, although the company will only secretly show off this particular prototype, etnews reports. The device would let users choose between tablet and laptop mode, with the screen bending at 90 degrees. However, details about such a product aren’t available yet, and it’s not clear when such a convertible tablet model would ever be launched.

Even so, it’s not surprising to see Samsung further pursue its foldable/bendable screen strategy. For a few years now, the company kept showing off its technology at various trade shows, hinting at what the future will bring. The company has already launched its first mobile device with a flexible display, the Galaxy Round, although the smartphone is only available in South Korea and has not received that much attention from consumers – comparatively, LG’s G Flex handset that also has a bendable screen and has launched in many other markets.

Samsung has already patented such tablets with displays that fold up to 90 degrees, and even presented a video at CES 2013 showing off such a product (see following video starting at the 2:45 mark). However, that concept device looked more like a smartphone/tablet combo rather than a tablet/laptop device.

Even though it may be a while until Samsung actually launches a flexible tablet, the company is clearly interested in competing with Apple in the tablet business just like it does in the smartphone market: By flooding the market with multiple models suited for various needs, including flexible devices that may appeal to some consumers. Last year, Samsung significantly expanded its tablet market share, which it plans to further grow this year – the company has already launched four new tablets and is planning to unveil several others down the road.