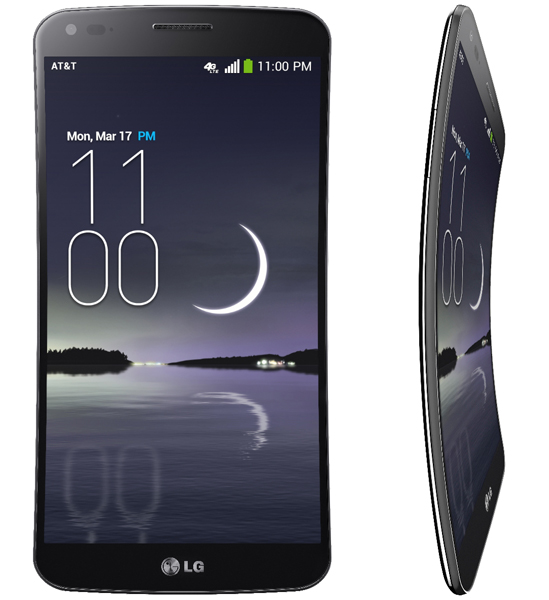 LG’s banana phone is coming to America. AT&T announced on Monday from CES 2014 that it will launch LG’s first curved smartphone, the G Flex, sometime in the first quarter this year. The news is in line with earlier rumors, which also noted that T-Mobile will release the G Flex in 2014. LG also announced on Monday that Sprint will carry the G Flex in Q1 as well. While the curved 6-inch AMOLED display is the star of the show on LG’s latest phone, the G Flex also features a 2.26GHz quad-core Snapdragon processor, 2GB of RAM, a 13-megapixel camera, a 3,500 mAh battery and Android Jelly Bean 4.2.2. Pricing isn’t yet available but AT&T’s full press announcement follows below.

UPDATE: T-Mobile has confirmed the upcoming launch of LG’s G Flex as well. Its statement follows below after AT&T’s press release.

AT&t to offer its FIRST SMARTPHONE WITH CURVED SCREEN

LAS VEGAS, Jan. 6, 2014 – AT&T1 will offer its first smartphone with a curved screen, LG G Flex, in the first quarter of 2014, the company said today. Pricing and availability will be announced at a later date.

“AT&T continues to stay ahead of the curve in growing its device portfolio and giving customers the most advanced smartphone technology,” said Jeff Bradley, senior vice president – Devices, AT&T. “We’re excited to add LG’s futuristic G Flex on the nation’s fastest and most reliable 4G LTE network. Its curved form factor and enhanced audio and visual experience is a great addition to our strong line-up of Android devices.”

The LG G Flex shape introduces new visual and ergonomic benefits that enhance the smartphone experience. The large curved 6-inch true HD P-OLED display provides an immersive video experience with reduced glare and the unique shape is comfortable in the palm of the hand or against the contour of your face.

T-Mobile is ringing in the New Year by further expanding its ever-growing 4G LTE smartphone line-up with the addition of the world’s first curved, flexible smartphone[1] from LG Electronics – the LG G Flex. T-Mobile customers can get the G Flex with the Simple Choice Plan, which offers unlimited talk, text and Web as well as unlimited text and data in 100+ countries – at no extra charge – all with no annual service contract on the fastest nationwide 4G LTE network[2].

The LG G Flex offers T-Mobile customers a more reassuring grip and fit as well as an outstanding voice and sound experience because the distinctively curved design follows the contour of the face. The ultra-thin, ultra-light, flexible 6-inch Plastic OLED display is brighter and more precise making it ideal for watching videos or playing games on-the-go. The G Flex also features the Rear Key control for convenience of using one index finger to power the device on or off and adjust volume. It also has self-healing paint on the G Flex back cover that LG says is designed to help recover from the wear and tear of daily use, including scratches from keys[3]. The advanced smartphone features a 13MP HD camera to capture crisp, detailed, high-quality images and videos. In addition, the LG G Flex includes the world’s first curved battery technology for a smartphone with a capacity of 3,500 mAh for power, sleek design and comfort in the palm of your hand.

The new smartphone will include LG-exclusive features such as KnockON™, Slide Aside™ and Qslide Function, allowing customers to perform several tasks simultaneously. G Flex will also introduce new features such as QuickTheater™, which can give users virtually instant access to entertainment apps for the ultimate cinematic viewing experience on the curved smartphone; and Dual Window, which divides the wide 6-inch screen into two separate windows for more efficient multitasking.

Pricing and availability for the G Flex will be shared in the coming weeks.