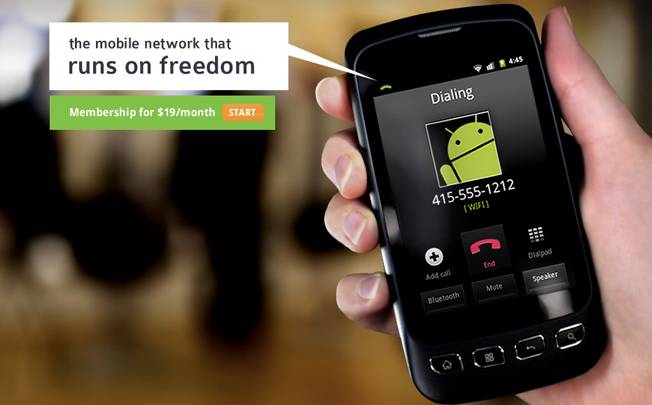 As small mobile virtual network operators continue to look
for ways to steal subscribers from major nationwide wireless
carriers, low-cost unlimited plans are often the go-to move for
attracting attention. New
MVNO entrant Republic Wireless is going to be hard to
compete at the low end of the price spectrum though, and the
virtual carrier’s $19 “unlimited everything” service is now live
across the country.

The MVNO announced on Wednesday that it has begun
fulfilling orders and shipping its version of the Motorola DEFY
XT complete with tweaked software that bounces calls and data
between Wi-Fi networks and Sprint’s (S) cellular
network, favoring the former to keep costs low. The Android-powered DEFY
XT is just $249 with no commitment and it is the only handset
Republic Wireless offers. Republic’s press release follows below.

Low Cost WiFi Smartphone from
Republic Wireless With Unlimited Data, Text and Voice Shipping
Now Just in time for the holidays,
Republic Wireless now shipping WiFi smartphones nationwide that
offer unlimited data, text and voice service for $19 per month,
well below prevailing market rates. Raleigh, NC (PRWEB)
December 12, 2012 A much-anticipated Wi-Fi smartphone plan that
costs just $19 per month became widely available today as Republic
Wireless began nationwide shipments of a new breed of smartphones.
The service is already a hit with holiday shoppers looking for
no-contract service that delivers value and performance. The plan
offers unlimited data, text and voice for $19 per month, a small
fraction of the average monthly wireless phone bill. Republic
Wireless keeps rates low with a Hybrid Wi-Fi cellular Calling
network that uses a combination of home, office and public hot spot
Wi-Fi as its primary network and the nationwide network of Sprint
when Wi-Fi is not available. Republic Wireless CEO David Morken
said the launch follows a year of intensive work by his team, which
included beta testing with thousands of subscribers. He said the
past year’s work has provided strong validation that the company’s
Wi-Fi-first approach is a winner. Market data supports Wi-Fi
Smartphone for talking and texting as well as data “We saw Wi-Fi
becoming ubiquitous and cheap, while cellular spectrum has become
increasingly expensive and controlled from the top,” Morken said.
“So we set out to invert the status quo, by routing as much as
possible – voice, text, and of course data, over Wi-Fi whenever
possible. When Wi-Fi is not available, our smart phone works just
like a regular phone on the nationwide network of Sprint.” The WiFi
smartphone is poised to be a disruptive force in the wireless
industry. The Wireless Broadband Alliance reports worldwide public
hotspots continue to increase rapidly, and an April 2012 report
from industry analyst firm Strategy Analytics estimates 61% of all
US households currently have Wi-Fi networks installed at home.
“This is a story about the way smartphones should be – a smart
phone with a smarter phone plan. Republic Wireless is all about
providing great benefits and returning value to consumers with a
Wi-Fi smartphone,” Morken adds Republic Wireless is shipping the
Motorola DEFY XT, available for $249 on the company’s website, plus
a $10 start-up fee and applicable taxes. The plan is pay-as-you-go,
with unlimited data, text and voice calls, backed up by a 30-day
money back guarantee. The dual-band Android CDMA handset features a
3.7-inch Corning® Gorilla® Glass display, VGA webcam, and 4x
digital zoom camera with auto-focus and LED flash. It is compact
and lightweight and delivers rugged, water-resistant performance.
Republic Wireless offers quick and simple signup for the
game-changing WiFi smartphone on its website, where purchasers
click on buttons to select the phone, set up their phone number and
proceed to checkout.