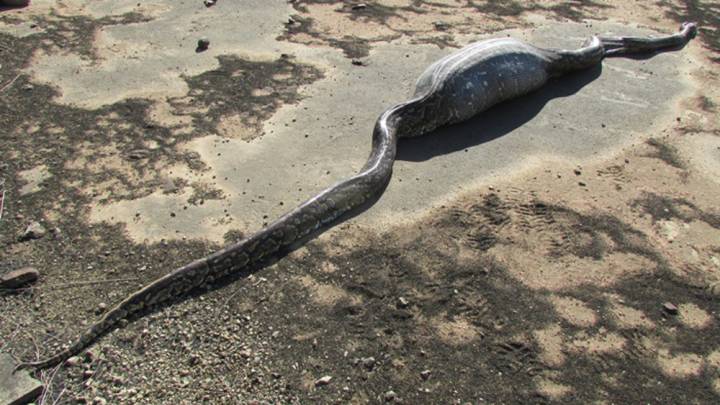 Because the python ate it. No, this isn’t a joke – it wouldn’t be a good one, either. It turns out that pythons are capable of eating almost anything they can catch, including a 30-pound porcupine that has plenty of spikes on the back. But digesting these beasts is an entirely different story.

While we have no idea how the python managed to ingest the porcupine, it’s more than clear this was the snake’s last supper. LiveScience posted images on Friday showing the huge python before and after its death.

On June 14th, a cyclist riding the mountain bike trails at the Lake Eland Game Reserve in KwaZulu-Natal, South Africa spotted the python digesting his pray (image above), without knowing what was inside.

Park rangers thought the python ate a small warthog or a baby impala. Days later, however, they found the python dead near the bike trail. Apparently, the snake had fallen, and the porcupine’s quills pierced through the snake’s digestive tract and killed it.

The snake measured an incredible 12.8 feet, the park rangers said. Graphic images showing the dead python with the undigested pray inside him follow below.