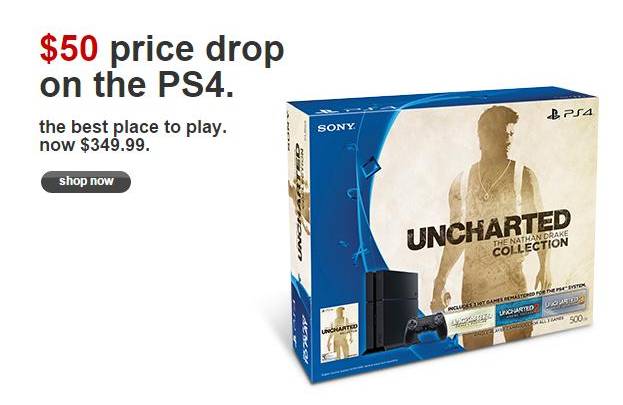 Despite its continued dominance of the console market, it looks like Sony is prepping a price drop for its PlayStation 4 this holiday season. Spotted by video game deals scourer Wario64 this weekend, Target temporarily listed the PS4 at $349.99 in an ad on its website before realizing they’d made an error.

READ MORE: Microsoft is bringing our most requested feature to the Xbox One controller

We’ve heard plenty of rumors about PS4 price drops over the past several months, but until now, there hasn’t been much in the way of evidence. With a huge graphic proudly displaying “$50 price drop on the PS4,” we’re starting to feel a little more confident about the possibility.

It wasn’t just a PS4 console price drop either — in line with Microsoft’s recent bundle extravaganza, it appeared that the deal would have come alongside the Uncharted: The Nathan Drake Collection PS4 bundle, which will be available this Friday.

Of course, as Ars Technica notes, this could simply be a big misunderstanding on Target’s part. Just recently, Target began offering customers a $50 gift card to go along with any PS4 bundle they picked up. Someone on Target’s marketing team theoretically could have gotten the deal mixed up with a full-fledged price drop.

Sony also announced the Uncharted PS4 bundle just a month ago and explicitly stated that the price would be $399.99. I guess we’ll have to wait until later this week to find out, but if you’re in the market for a PS4, it might not be a bad idea to wait a few days before you pull the trigger.