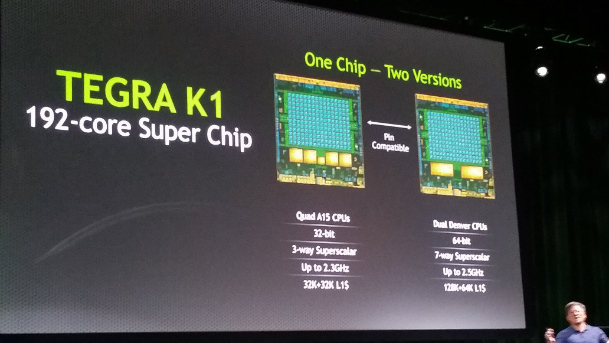 NVIDIA on Sunday hosted a pre CES 2014 media event to unveil the successor of the Tegra 4: the next-gen mobile processor, the Tegra K1, a 192-core GPU “super chip” that will supposedly bring current-gen console-grade gaming experience to mobile devices. The Tegra K1 features the same Kepler architecture that powers “the fastest GPU on the planet, the NVIDIA GeForce GTX 780 Ti,” the company said, and the chip will be available in two configurations including a 32-bit quad-core, 4-Plus-1 ARM Cortex A15 CPU version, and a 64-bit dual Super Core CPU (codenamed Denver) version.

The Tegra K1 supports DirectX 11, OpenGL 4.4 and tessellation, which allow “the most advanced game engine,” Unreal Engine 4 to run on a mobile device. NVIDIA says that such features will bring the same video game graphics available on new consoles including Xbox One and PlayStation 4 to mobile devices based on Tegra K1. However, the company failed to mention what next-gen mobile Android devices will pack the new chip, and did not say whether the new processor also supports LTE. NVIDIA did say that it expects 32-bit Tegra K1 processors to equip mobile devices in the first half of 2014, with the 64-bit model to launch in the second half of the year.

In addition to mobile devices, NVIDIA wants the Tegra K1 mobile processor to also power cars and smart cars of the future, including self-driving autos. The company will likely provide Tegra K1 chips to its partners in the automotive industry in the future – currently there are more than 4.5 million cars with NVIDIA inside, from companies including Audi, BMW, Tesla Motors and Volkswagen – as the Tegra K1 chip will be used for advanced driver assistance systems, digital dashboards and infotainment systems.