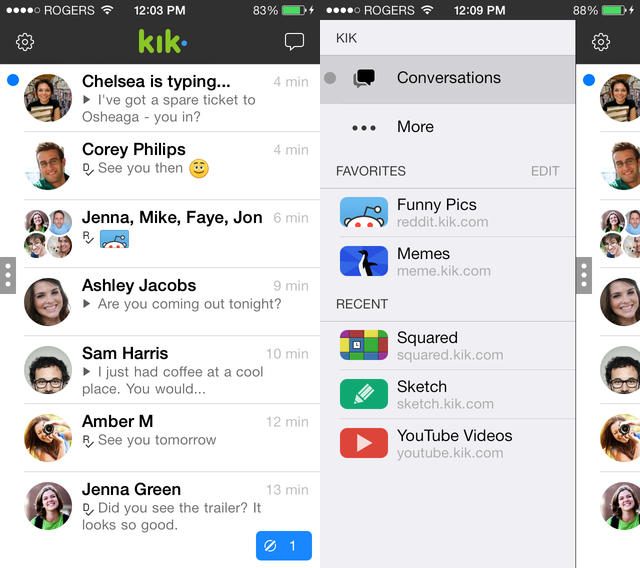 We are now witnessing the first signs of just how important messaging apps could become in North America for promoting games — and this has huge implications for BlackBerry’s battle for survival. Texting apps like LINE and Kakao are making hundreds of millions of dollars in Asia by acting as promotional tools for mobile games. 19 out of 20 top-grossing apps in South Korea are now distributed via KakaoTalk’s messaging platform. Last month, a mid-sized messaging app called Kik demonstrated how it is beginning to flex its muscles in America.

A new app vendor called Koa.la launched Costume Party game on the Kik messaging platform a few weeks ago. According to an interview with Kik’s CEO Ted Livingston, the game hit 1 million downloads in just 21 hours. It then reached 3 million downloads within a month. Koa.la executives stated that the game was not marketed via the usual ad networks; its early momentum was purely derived from leveraging Kik’s messaging network.

Perhaps the most intriguing thing about Costume Party is that in this past weekend, it had more than 500,000 users per day. According to Koa.la, 50% of consumers who tried the app have returned to use it a second time.

This is an exceptionally high number. In the game app universe, a return user level that tops 20% is a rare feat. These milestones seem to support what LINE executives were stating at the Tokyo Game Show in September: messaging apps can boost retention and increase the number of daily playing sessions. Consumers visit their favorite messaging apps several times a day and follow the progression of turn-based games automatically. The high frequency of messaging app sessions bleeds over to apps that piggyback on them.

Kik is not yet among the giants of the messaging app business. Its 95 million users place it a rung below WhatsApp, WeChat, LINE and KakaoTalk. But WhatsApp does not yet have an app promotion platform and the Asian app champions are experiencing trouble penetrating the U.S. market.  Meanwhile, Kik is plugging along as the No. 30 iPhone download and No. 5 Social Networking app in America. It is methodically expanding its reach and patiently undermining Facebook, which is now losing a steady stream of teen consumers to the hip Kik-Viber-Snapchat-Instagram cluster.

According to Onavo, Kik was among the biggest gainers in user engagement among top U.S. apps in August. Kik’s seemingly modest and down-to-earth 25-year old CEO is in the process of undermining the mighty Facebook in its core market. There is a fascinating Canada-California contrast with the carefully unassuming Kik and the brash, obnoxious Path executives who casually mentioned a $1 billion valuation last spring and are now out of iPhone’s top-1500 chart.

Kik basically offers the roadmap for BBM, its hometown rival in Waterloo, where messaging app industry tensions are suddenly disrupting the harmony of a sleepy Ontario town.

Kik is now adding new games to its platform every week. As the game initiative picks up steam, Kik’s performance on the U.S. app chart is improving, rising from 60-80 to 20-30 over the past year. The growing popularity of Kik in turn improves the reach of the games it promotes, creating a virtuous circle. This has helped lift Kik above rivals like Viber,  LINE and WeChat in recent months — and into rough download parity with the global leader WhatsApp.

Rumors are now circulating about WhatsApp planning a game platform launch of its own in early 2014. LINE and WeChat are expected to roll out massive new promotional programs in coming months. BBM is likely to invest heavily in its own game platform. The U.S. app market is about to turn into an arena of rival messaging platforms, each attempting to leverage its user base to become a marketing machine.

The goal is to replicate Kakao’s utter dominance in Korea and LINE’s staggering success in Japan. One side effect could be the derailing of Facebook’s content distribution ambitions. This is one of the most fascinating developments the app industry has ever seen.