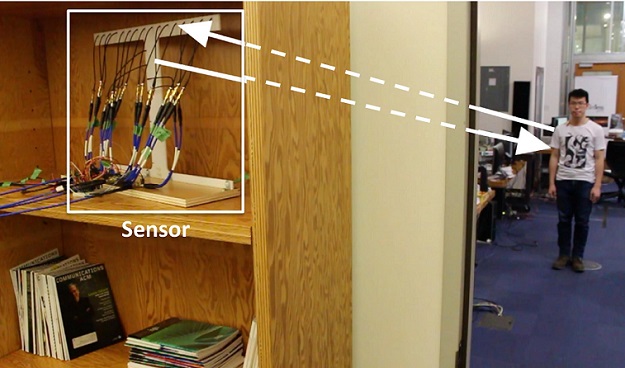 Leave it to the brilliant minds at MIT to come up with a device so technologically advanced that you’re not quite sure if you should be excited or perhaps a little bit nervous about its long-term ramifications.

Recently, scientists at MIT’s Computer Science and Artificial Intelligence Laboratory came up with a device that can effectively see through walls and identify which persons are standing behind it.

The future is here, and apparently it’s being created in Cambridge, Massachusetts.

The device in question, called RF-Capture, works by sending out radio waves which, upon hitting an individual standing standing behind a wall, are reflected off various body parts and back to the device for analysis. When the radio waves are bounced back, RF-Capture measures the intensity of the waves, among other variables, and then uses a complex algorithm to put together a rudimentary silhouette model of the person’s body type.

All the more impressive, the device can not only make out a person’s chest, arms, and head, but it can also distinguish between two different people and even different types of postures.

The abstract from a research paper detailing the device and its capabilities reads as follows:

We present RF-Capture, a system that captures the human figure – i.e., a coarse skeleton – through a wall. RF-Capture tracks the 3D positions of a person’s limbs and body parts even when the person is fully occluded from its sensor, and does so without placing any markers on the subject’s body. In designing RF-Capture, we built on recent advances in wireless research, which have shown that certain radio frequency (RF) signals can traverse walls and re-flect off the human body, allowing for the detection of human motion through walls. In contrast to these past systems which abstract the entire human body as a single point and find the overall location of that point through walls, we show how we can reconstruct various human body parts and stitch them together to capture the human figure. We built a prototype of RF-Capture and tested it on 15 subjects. Our results show that the system can capture a representative human figure through walls and use it to distinguish between various users.

As for potential use cases, the folks at MIT believe it may have practical applications in the realm of healthcare and perhaps even law enforcement.

Speaking to VICE, researcher Fadel Adib explained: “In hostage situations, you might want to understand how people are moving inside, and understand who the victim and hostage-taker is. This can be very important in law enforcement. It’s true that there are privacy concerns, but even in terms of surveillance, there are beneficial applications.”

The MIT team says that its RF-Capture device is only about a year away from being a commercial product.