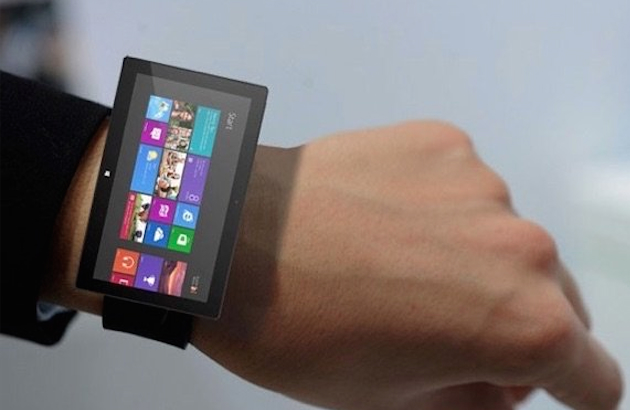 Just like everyone else, Microsoft is also interested in smartwatches, recent patent discoveries have revealed, with a Forbes report saying that the company’s first such device will be iOS- and Android-friendly. While it’s not clear when the device would be launched, it appears that GearLive got its hands on a smartwatch prototype from a Microsoft tester.

According to the publication, the smartwatch has an elongated form factor, but isn’t “comically large” like the concept in the image above. “It is much more akin to something like the Fitbit One or Samsung Gear Fit in shape rather than taking on the shape of a traditional watch, like the Pebble did, or like what Google showed off with Android Wear,” the publication wrote.

“What we saw had a flat display, while the inner portion that would rest against your skin was curved.”

The unnamed Microsoft smartwatch – which GearLive refers to as the “Surface watch” – apparently has a Metro-like interface, with the same flat icons that are seen on devices running Windows 8, Windows Phone, and the watch connects to other smart devices via Bluetooth LE. The prototype unit did not have a high-resolution display.

The device is compatible with both iOS and Android, but also with other platforms including Windows, OS X and Xbox One.

The Surface watch features various sensors, including a heart rate monitor, accelerometer, gyroscope, GPS and a galvanic skin response senor that’s built into the watch band, whereas all other sensors are found in the smartwatch itself.

Interestingly, in addition to the expected health and fitness features of such a device, Microsoft’s smartwatch could also pack some gaming-related features once it’s launched, as the publication was told the biometric sensors might be used in unique ways. The smartwatch could be used together with Kinect to offer even more precise gameplay, while other sensors inside the watch would let game makers adapt gameplay for certain horror Xbox titles based on pulse and sweat, GearLive speculates, although such features are yet to be confirmed.