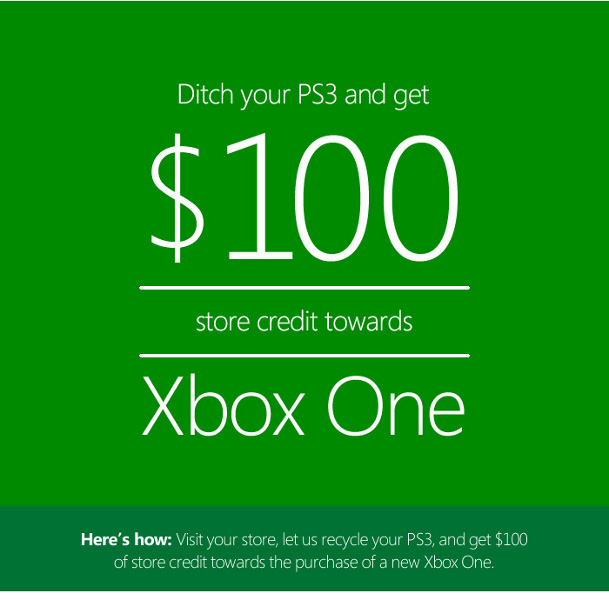 We get it: you’re fed up with the ‘console war’ narrative. Both the Xbox One and the PlayStation 4 are flying off of store shelves and we’re all waiting anxiously for games to start showing up on both consoles later this year, but Microsoft’s latest offer is more than a slight jab at the competition. Oxidax, a NeoGAF forum-goer, received an email containing the image you see above, advertising a deal at any Microsoft retail store which will allow customer to trade in a working PlayStation 3 for $100 off a brand new Xbox One.

“Trade up and get your hands on the new Xbox One,” says the offer on Microsoft’s website. “For a limited time, bring in your PS3, Xbox 360 S or Xbox 360 E and receive $100 of Microsoft retail store credit.”

According to the fine print, you’ll have to actually pick up an Xbox One while you’re in the store in order to receive the maximum trade-in value, but regardless of the details, this is an aggressive push by Microsoft to convert any stragglers from the last generation over to Xbox territory. The deal will last until March 2nd, so you’ve got just over a month if you want to take advantage of the offer.