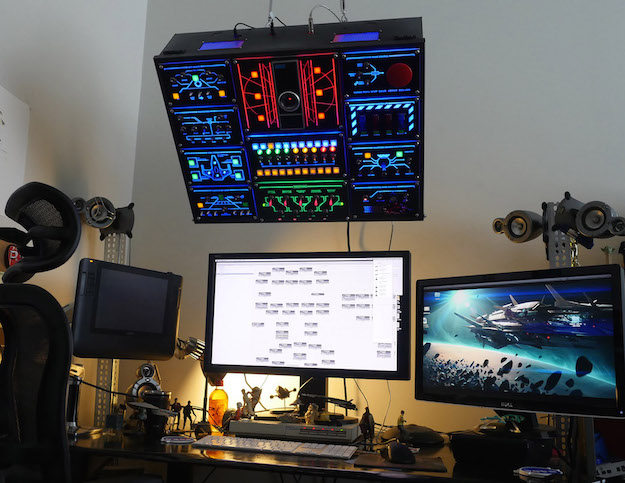 As far as DIY projects go, this overhead control panel may very well be the most impressive contraption we’ve ever seen. Put together by a Reddit user who goes by the name Smashcuts, the control panel — which boasts an awesome design straight out of a Sci-Fi movie — sports a number of captivating and vibrant LEDs  alongside 100 programmable buttons which can do almost anything you can think of.

From opening apps and saving documents, to performing specific functions in applications like Adobe Photoshop, the wide array of functions this control panel can carry out is truly remarkable.

The entire project took a few months to put together, with the final creation weighing in at about 40 pounds.

Here’s how it was all put together, from the hand wiring to the laser etching and everything in between.

Like many grand ideas, the entire project began as nothing more than a drawing.

Here are the LED backlights.

This photo here is where all of the USB controllers reside.

The wiring involved in getting this together is no joke.

And slowly but surely, the control panel is coming together.

The photos below showcase what some of the more obscure buttons do. Here, flipping these switches will send various incarnations of “haha” to whatever text window happens to be active.

The buttons pictured below are particularly cool. Hitting the “Don’t Panic” switch cues up a Hitchhikers Guide to the Galaxy YouTube video, “Serenity Now” cues up a Firefly clip, and lastly, the “Hold Steady” switch starts playing music from the band of the same name.

And just when you thought this project couldn’t possibly get any cooler, here’s what happens when one presses the big red panic button.

Here, the ‘Less Rock’ and ‘More Rock’ buttons adjust the audio levels in iTunes while the switches located below launch iTunes playlists of the same name.

And this is just a taste of what this jaw-dropping control panel can do. Make sure to hit the source link below to check out the full photo gallery and step by step process of how this amazing creation was built from scratch into one of the cooler things we’ve seen in quite some time.