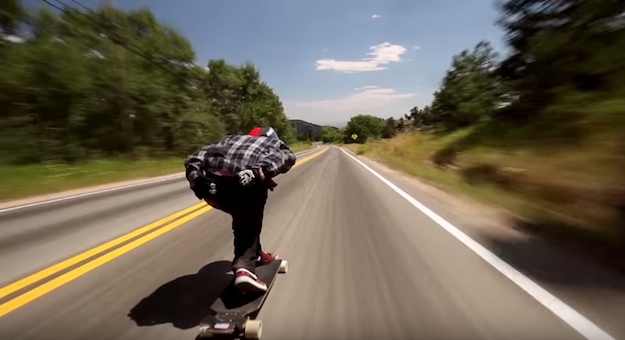 The stunt performed in the video below is pretty crazy. Zak Maytum, a downhill longboard racer from Colorado, recently decided it’d be a cool idea to hop on his longboard and fly down a Boulder highway at about 70 miles per hour. And oh yes, did we mention that the highway has a speed limit of 30 miles per hour?

The video really does a great job of conveying how fast Maytum is going. And in case you need any proof, if you keep an eye out for when Maytum crouches down and puts his gloves to the pavement, you’ll literally see sparks flying. Clearly, he’s flying down the street like a speed demon.

When I first saw the video, I naturally assumed that he was doing this on a closed course. But then I noticed that he was bypassing oncoming traffic! This is positively insane, but undoubtedly makes for an exhilerating video. Though there a few apparent close calls where it seems as if Maytum might be losing his balance, he expertly manages to remain in control for most of the trip down.

Sometimes people go to really elaborate lengths to perform some ridiculous video stunt to try and impress viewers. As it turns out, sometimes all you need is a longboard, some safety gloves, a video camera and an open road to get the job done.