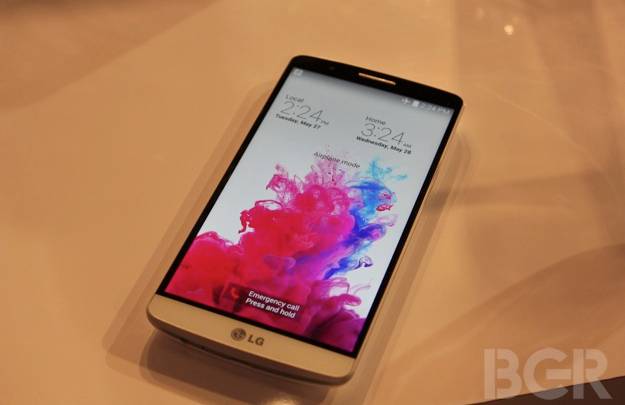 The LG G3 has yet to be launched in the U.S., and a new image leak from @evleaks reveals that the main carriers in the region already had their way with the handset. Of the four LG G3 versions going to AT&T, T-Mobile, Sprint and Verizon, only the Sprint model lacks any carrier branding. And of course, Verizon’s version has more logos on the handset than any other model.

Verizon’s name is plastered all over the home screen, top of the screen and the back of the handset, while AT&T and T-Mobile only have their logos on the back of the phone.

Verizon also appears to have a different color option than its competitors, with the leaked image showing a different shade of black for Verizon’s G3. The phone should be available in five colors including Metallic Black, Burgundy Red, Moon Violet, Shine Gold and Silk White, although not all of them may be available in the same markets, or from the same carrier.

While there are obvious visual differences between these U.S. G3 models, they all sport the same design. What’s not known at this point is what specs they’ll have to offer. LG revealed during the G3’s announcement that it will have two phone versions in stores, a 2GB RAM / 16GB storage version and a 3GB RAM / 32GB storage option.

The image showing the four G3 versions for the U.S. follow below.