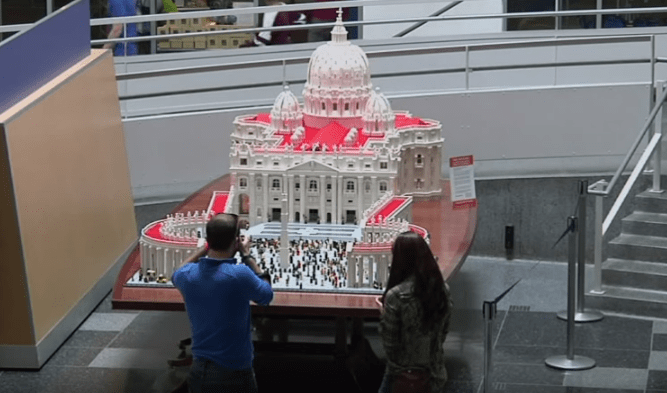 If there’s one thing we love, it’s nerds who undertake massive projects of questionable utility. Our latest such example comes to us via The Associated Press, which has scored a video interview with the Reverend Bob Simon, a priest who spent the last 10 months building an incredible replica of the Vatican out of Legos.

As you can see in the picture at the top of the page, Simon showed a real attention to detail in his depiction of the Vatican, which was built using an estimated 500,000 Lego blocks. And yes, in case you’re wondering, His Holiness makes an appearance at the famous Vatican Balcony:

That said, our favorite detail of this particular depiction of the Vatican has to be the tourist nun walking around with an iPhone and a selfie stick:

Simon tells The Associated Press that he was most intimidated by building the Vatican’s dome, since it’s hard to build rounded structures with traditionally blocky Legos.

To learn more about this awesome project and to hear how Simon kept himself sane while performing such a massive undertaking, check out The Associated Press’s full video below.