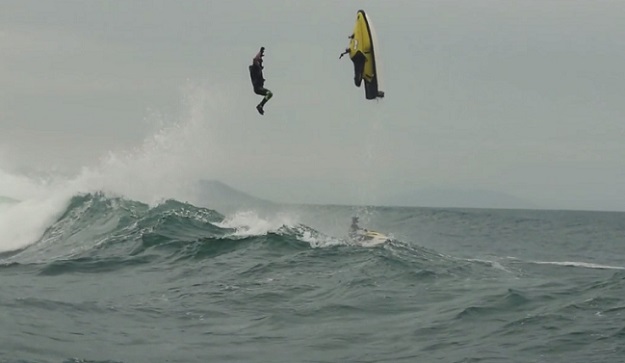 During this year’s Festival of Freeride in New Zealand, an annual event where jet ski riders perform all sorts of slick surfing maneuvers and tricks in the water, a $3,000 camera drone inadvertently incorporated itself into the show.

Captured by surf filmographer Guy Mac, the video below shows what happens when a jet skier tries to go up and catch some air and collides with a DJI Insipire drone. While the jet ski rider reportedly emerged unscathed, the drone was ultimately buried at sea.

The entire 5-minute video is worth checking out, especially if you’ve never seen anyone do surfing style tricks on a jet ski before. For anyone who wants to skip right ahead to the mid-air collision, you can forward ahead to about 3:45 into the video.

Awesome stuff, to be sure, but this still isn’t quite the best drone-related video we’ve seen over the past few months. For anyone looking for more incredible drone action, make sure to check out this video of a police-trained eagle snatching a drone out of the sky or this incredible video of a drone swarm lighting up the sky in dazzling fashion.