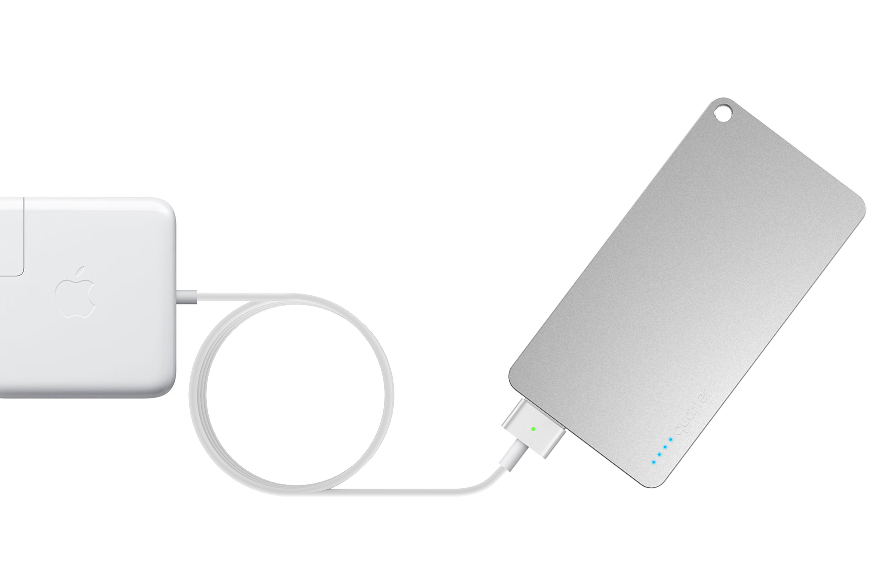 One way of dealing with smartphone battery issues is to carry an external rechargeable battery (or power bank) that can provide precious juice when you’re in a bind. There are plenty of options out there nowadays, some capable of charging a new iPhone 6s numerous times before having to be charged up again themselves. However, there are two problems with portable battery packs when it comes to Apple devices, and it’s one that manufacturers have yet to fix: they can be very slow to charge, and you generally have to leave them on for the entire night to recharge. Beyond that, you need to carry a separate micro USB charger to power them up.

One Chinese company thinks it has figured out a solution for both of these issues – a fast-charging a power bank. But to pull it off, it had to defy Apple.

Named the Quarter, the 5,000 mAh battery pack relies on a MacBook MagSafe power adapter to charge. According to the company’s Pozible listing, Quarter needs to be hooked to a MacBook charger for just 15 minutes to suck up enough power to charge an iPhone 5s.

The device is about as big as a phone and it can reach a full charge in 45 minutes using the MagSafe power adapter (14.5-21V at 3A), or about 7 hours using a standard charger (5V at 1A). The internal battery is good for about 500 cycles and can recharge a variety of other devices, including the 12-inch Retina MacBook.

In fact, the company’s marketing materials say that the Quarter can intelligently determine the power needs of a device and adjust output current accordingly.

The battery pack seems to target MacBook users (regardless of their smartphone preference) and costs $38 on Pozible, $20 less than the future retail price. The company says this is not a crowdfunding campaign but a presale, as it’s already in the process of manufacturing 1,000 units that will be shipped around November 15th.

Beaver Electronics, the company that makes the Quarter, told BGR that it used the MagSafe for fast recharging, but it doesn’t have the express approval of Apple. The company did contact Apple but has not received a response. Even so, the battery pack should be safe for use, both when it comes to being charged using a MagSafe adapter or charging a device via USB. At least that’s what the company says.

Apple has never allowed third-party accessory makers to create any accessories using its proprietary MagSafe power adapter technology, so it’ll be interesting to see if the Quarter will have any future beyond this first limited sale.

A similar project was funded via Kickstarter not too long ago — the Lumopack battery pack — but that company uses a proprietary cable to add fast-charging abilities to its power bank.