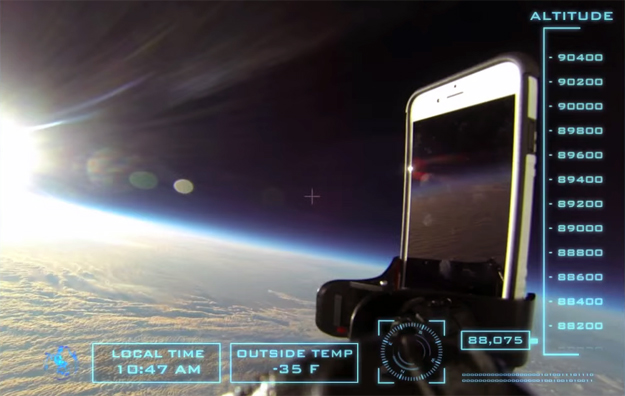 How annoying is this? You drop your phone accidentally from barely 3 feet off the ground and the screen shatters instantly. Meanwhile, Urban Armor Gear flies an iPhone 6 into space and intentionally drops it back down to Earth, and it emerges unscathed. UAG’s video isn’t going to make the sting of having dropped and cracked your smartphone any less painful, but it’s still pretty fun to watch.

iPhone case maker Urban Armor Gear recently slapped one of its latest protective cases onto an iPhone 6 and  floated it up to space on a rig attached to a balloon. After the phone froze and rapidly discharged, the company dropped it back to Earth from an altitude of more than 100,000 feet above England.

UAG also recorded the whole ordeal with two GoPro cameras, of course, and posted the resulting video on YouTube.

A parachute was deployed to break the phone’s fall during its descent, so of course this can’t really be considered a true drop test. What was the point, then? We have no idea, but it’s pretty neat to watch, nevertheless.

The full video of the iPhone’s climb and drop is embedded below.