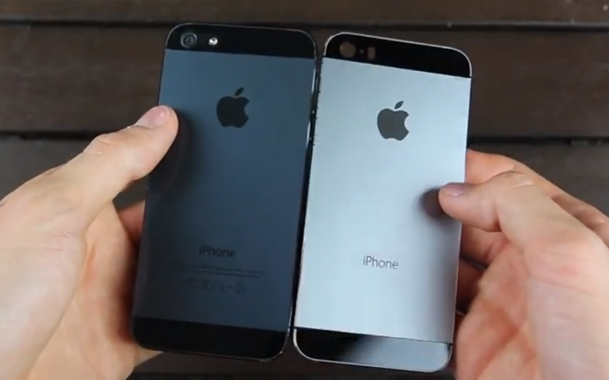 Stop us if you’ve heard this one before: Apple plans to unveil two new iPhone models on Tuesday and one of them, reportedly dubbed iPhone 5S, will likely feature a fingerprint scanner. A pair of recent leaks seemingly revealed the new flagship iPhone 5S’s packaging, on which is printed an image of the handset with a redesigned home button. The new icon-less button has seemingly been wrapped with a silver ring, and now a new leak shows the redesigned home button in white for the first time ever.

French blog Nowwherelse.fr on Tuesday morning published a photo of what it claims to be the quick start guide found within the retail packaging for Apple’s upcoming iPhone 5S. The image seemingly shows a white and silver iPhone 5S with all of the moving parts labeled, and the text pointing to the new home button reads “Home button / Touch ID sensor.”

Several earlier reports suggested that Apple’s new fingerprint scanner would be embedded in the iPhone 5S’s home button and might be used primarily to unlock the handset securely, so the name “Touch ID sensor” would be apropos in that scenario.

By all accounts, Apple is holding a press conference on Tuesday to unveil two new handsets. The first will the flagship iPhone 5S, which is said to feature two new color options — champagne gold and a new lighter gray — as well as an improved camera with a dual-LED flash, an upgraded processor and a fingerprint scanner. The phone is expected to debut alongside the lower-cost iPhone 5C, which will sport specs in line with Apple’s current iPhone 5, but in a new plastic case that will launch in five colors.

As we wait for Apple’s event to begin, round-ups of what to expect from each new iPhone model can be found here: iPhone 5S / iPhone 5C

The leaked image said to show the iPhone 5S’s new home button and fingerprint scanner in white follows below.