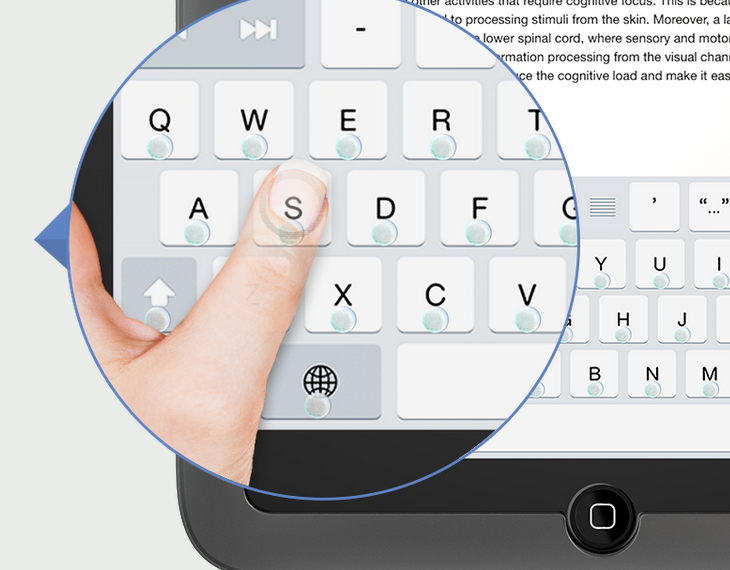 Want to significantly improve your typing on your iPad? If so then you may want to check out Phorm, a keyboard case that you might love even if you hate most traditional iPad keyboard cases.

Phorm, which first demoed by Tactus Technology in mid-April last year, is an accessory that has a unique take on iPad keyboards: The device is actually a screen protector that contains a special liquid allowing it to morph into an on-screen keyboard with a simple switch of a button. The liquid-filled buttons disappear from the screen once the keyboard isn’t needed anymore.

The Phorm is now available for preorder online for just $99, or $50 lower than its upcoming retail price, but unfortunately the accessory is only available for iPad mini models so far.

The device should be shipped at some point this summer, and the team behind it is also working on a similar case for the iPhone 6 Plus.

The full press release is available below.

Introducing PHORM™, a Dynamic Morphing Screen That Magically Provides Buttons on Touchscreens That Are Only There When You Need Them and Gone When You Don’t

Technology breakthrough gives anyone the productivity of a MacBook but the mobility of an iPad, now available for pre-sale as a combined iPad mini case and screen protector

Fremont, Calif. – February 12, 2015 — How many times have you tried to send an important email from your phone or tablet, only to find that you’ve accidentally sent something riddled with auto-corrected typos? While the software inside our mobile devices continues to adapt to user individuality with the advent of artificial intelligence, Phorm is the first time hardware intuitively adapts based on what you want to do.

Check out a video of Phorm here: http://www.getphorm.com

Combining a case, keyboard and screen protector in one, Phorm dynamically morphs the screen of an iPad mini into a tactile typing surface with physical buttons that seamlessly disappears when a flat touchscreen is needed. There is no extra keyboard, just a magical change on the screen of your mobile device. Phorm transforms your iPad mini into the most productive mobile device ever, without modifying the form factor or requiring any additional battery power. Phorm is being launched today with a thirty-day pre-sales campaign at http://www.getphorm.com.

Phorm is the first consumer product from Tactus Technology, which was co-founded six years ago by two Ph.Ds with extensive product development experience in optical and microfluidic technologies. The team also includes an ex-BlackBerry keyboard designer, who is a recognized keyboard design expert, as well as former Nokia and Amazon Lab126 employees who have a wealth of experience in developing consumer devices.

Engineered by the industrial design firms behind the Beats by Dre products, Phorm has the power to transform the way we interact with all of the screens in our lives, by finally making the touchscreen physically tactile and easy to use. Microfluidic technology activates optically-clear buttons with just a simple slider bar on the back of the case. The buttons rise above the screen and guide your fingers to the optimal touch zone on your device’s keyboard, improving accuracy, confidence, satisfaction, and the overall typing experience.

“We built Phorm so tablet users will never again have to choose between thin stylish devices with touchscreens and amazing usability,” said Dr. Craig Ciesla, CEO and co-founder of Tactus. “Typing on a flat touchscreen is still a really unnatural user experience. Adding a tactile dimension to an otherwise flat surface changes the way we will interact with all the screens in our lives. This is just the beginning.”

Phorm for iPad mini officially launches February 12, 2015, using pre-sales to confirm the scale of consumer demand and begin production. The iPad mini case will retail for $149 but is available for pre-order for $99. Customers interested in Phorm for the iPhone 6 Plus can sign up on the company’s waitlist now and receive early access to order the product once it is available to consumers. Phorm plans to start shipping its first batch of iPad mini cases in Summer 2015.

Pre-order your Phorm at http://www.getphorm.com

PHORM is the first consumer product from Tactus Technology. Co-founded by Dr. Craig Ciesla and Dr. Micah Yairi in Silicon Valley, Tactusis the pioneering developer of a breakthrough dynamic user interface for mobile, computing, CE and automotive applications – completely transparent physical buttons that rise up from a touchscreen surface on demand. PHORM is the first product available to consumers to combine a microfluidic panel, keyboard and protective case all in one. For more information, visit http://www.getphorm.com or follow @getphorm on Twitter.

PHORM is a registered trademark of Tactus Technology.