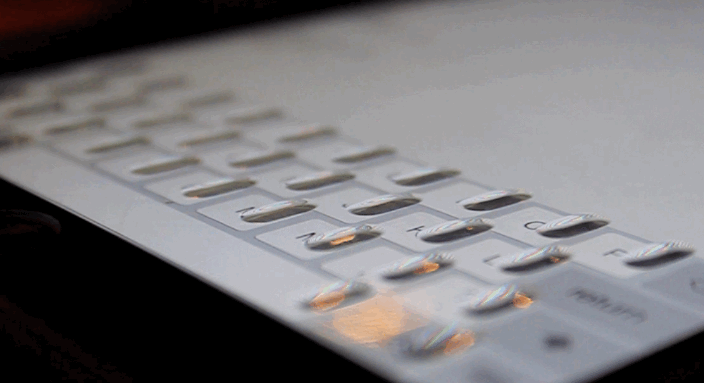 Tactus Technology is a startup that has developed an accessory that can create transparent keyboard buttons on top of a touchscreen display. The company is working with Taiwan-based Wistron, Business Insider reports, to manufacture such a keyboard case accessory for the iPad, which should start shipping later this year.

The cases, which will cost between $80 and $100, will work with help of a liquid that forms the physical buttons when such a feature is needed. The cases have two components, including a thin display layer that looks like a screen protector, but allows fluid to pass through it, and a hard-shell backing which will supposedly store the liquid in addition to protecting the device. With a push of a button, the liquid can fill the areas of the screen where the virtual keyboard is located, creating transparent buttons on top of them.

The technology would allow the companies to come up with accessories for other devices including Android tablets and smartphones. Moreover, Wistron could pack the tech into future devices by replacing the Gorilla Glass screen with a Tactus display that allows micro fluids to flow through it. Such devices could arrive next year.

“[Craig] Ciesla and his co-founder Micah Yairi came up with the idea for Tactus in 2008 when Yairi was working with a company making micro-fluids for medical devices,” the publication wrote. “Ciesla, who had always used a BlackBerry, had troubling typing with the recently released iPhone’s touch-screen and longed for his keyboard back. The pair decided to try to see if they could use micro-fluids to create a dynamic keyboard. Six years later, they’re ready to ship their first product.”

A GIF image and a video showing how the technology would work on various devices, follow below.