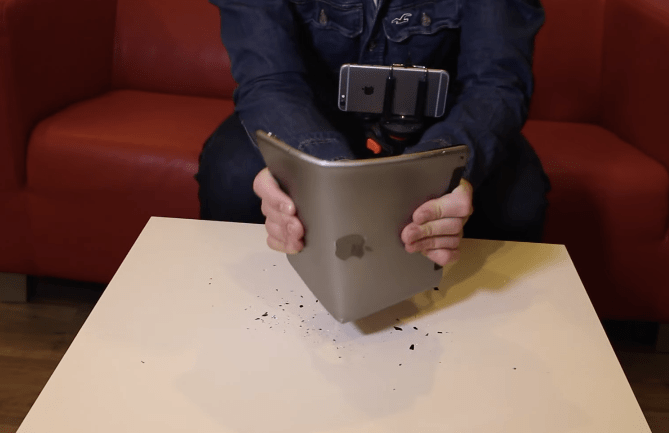 The reason the “bend test” videos for the iPhone 6 Plus went viral is that they raised questions about whether the device would bend just from carrying it around in your pants pocket. This shouldn’t be a concern for anyone who owns an iPad Air 2, since the tablet was never intended to be carried around in your pants pocket and we can’t imagine any reason for a sane person to do so. All the same, that hasn’t stopped YouTuber Marvin Macht from putting the iPad Air 2 through a bend test of his own and the tablet predictably did not hold up well under pressure.

READ OUR iPAD AIR 2 REVIEW: iPad Air 2 is as monumental as original iPhone

The reasons why the new iPad doesn’t survive being bent are pretty easy to understand: It’s a remarkably thin device that is also much larger than the iPhone 6 Plus. The more surface area you have on a thin object, the easier it is to bend — thus it shouldn’t surprise us to see the device crumple under pressure.

So please, people, if you buy an iPad Air 2 and you’re curious about whether it will bend under pressure, just don’t try it. There’s no need for it and breaking such an expensive device really is senseless. Marvin Macht has already done it for you — there’s no need for you to replicate it.