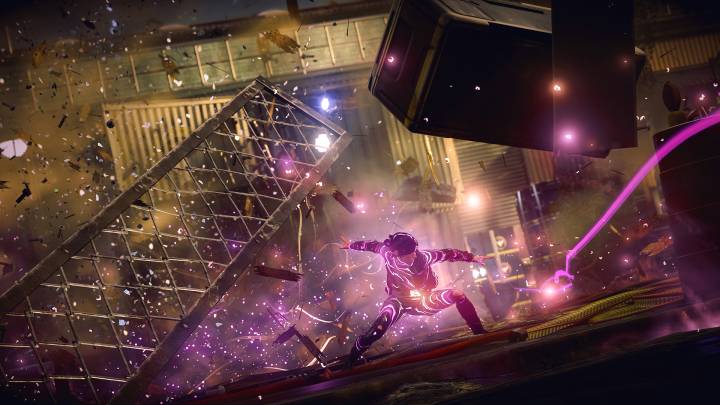 Despite being one of the standout console exclusives of 2014, Infamous: Second Son had one egregious flaw — we never got to know any of the secondary characters. Some of the best moments of the Infamous series revolve around the interactions between the protagonist and his companions, but Sucker Punch failed to flesh out the colorful cast in Second Son. Infamous: First Light is how they’re going to fill in the blanks.

First Light is basically a condensed version of Second Son (…hence the name). There’s the (scaled-back) open world environment, the side missions, the collectables and even the melodramatic narrative. That’s not to say I didn’t enjoy the story — it just doesn’t have much time to breathe.

First Light takes place, primarily, two years before the events of Second Son. Fetch, the neon Conduit who played a significant role in Second Son, and Brent, her brother, are in Seattle on a job (not a particularly legal one), when everything goes wrong. Brent ends up being abducted by a gang called the Akurans and Fetch has no choice but to save him.

The story of Brent’s kidnapping is told via flashbacks from Fetch’s point of view as she sits imprisoned in Curdun Cay, the D.U.P. detention facility where Second Son antagonist Brooke Augustine is attempting to train (and tame) Fetch for her own purposes. When the story flashes forward to Curdun Cay, the player is set loose in an arena that serves as both a training ground for new powers and a new mode for fans of the Infamous style of combat.

In the Curdun Cay Battle Arenas, you can choose between survival and rescue missions. Survival missions are fairly self-explanatory: fight off waves of increasingly tough enemies while not dying. Rescue missions require you to save hostages while keeping the enemy population to a minimum. If you own Second Son, you can play missions with Delsin as well, although I much preferred Fetch’s skill set in the arena.

That might be the best part of First Light — Fetch could have been nothing more than a palette swapped Delsin Rowe, but her powers feel completely fresh. Her ability to turn into a bolt of neon at a moment’s notice, for an unlimited amount of time, made traversal a breeze as I shot from one mission to the next. There are also purple rings all throughout the city that speed Fetch up a couple notches as she passes through, turning all of lower Seattle into a neon racetrack.

But the story, as hackneyed as it feels during a some of the more emotional moments, saves the fireworks for the final act, one you won’t want to miss if you have any interest in the world of Infamous. Sucker Punch has no lack of impressive voice talent to fill these roles.

Out of context, I’m not sure this story would have been worth telling, but given our knowledge of the dynamic, well-acted character from Second Son that is Fetch, First Light is a welcome return to Seattle.

Infamous: First Light for PS4 is available now on the PlayStation Store for $14.99.

Sony provided BGR with a digital copy of Infamous: First Light for this review.