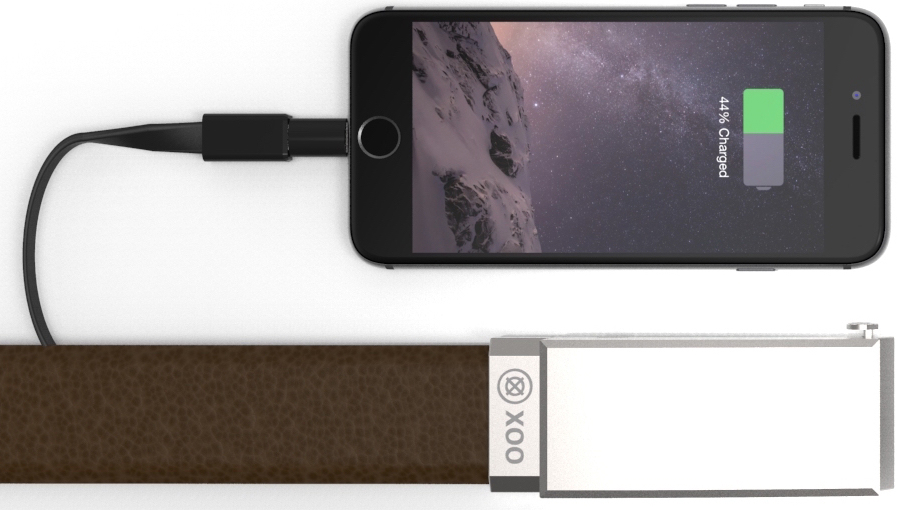 Nifty, a U.K. based company that has already successfully funded a nifty portable storage solution for MacBook laptops (the MiniDrive) is back on Indiegogo looking to raise funds for an equally interesting project, the XOO Belt. What’s so great about the company’s new belt? It has a hidden, but very important, feature: It can offer additional battery life to an iPhone or Android device on the verge of dying.

FROM EARLIER: Meet Prynt, the cool iPhone accessory mobile photographers have been waiting for

The XOO Belt packs a complex battery system placed partly in the belt buckle and partly in the actual belt, and it offers up to 2,100 mAh of extra battery life. The belt also has either a Lightning connector or a microUSB connector that lets the user charge an iPhone or Android smartphone while the device is resting in his or her pocket.

The battery technology is of particular interest, especially the flexible battery that’s placed inside the belt. “We’ve hidden six overlapping layers of cutting-edge flexible battery within each belt, giving a base power of 1,300 mAh of charge. Add this to the 400 mAh in each buckle—for a total of 2,100mAh—and you’ve enough to fully charge an iPhone 6 with some left over,” Nifty writes.

The XOO Belt has already passed $28,000 in pledges, and is looking to raise at least $50,000 with 30 days left to go in the campaign. The cheapest belt costs $155 on Indiegogo, and will ship at some point next July.

A video explaining this wearable spare battery concept follows below.