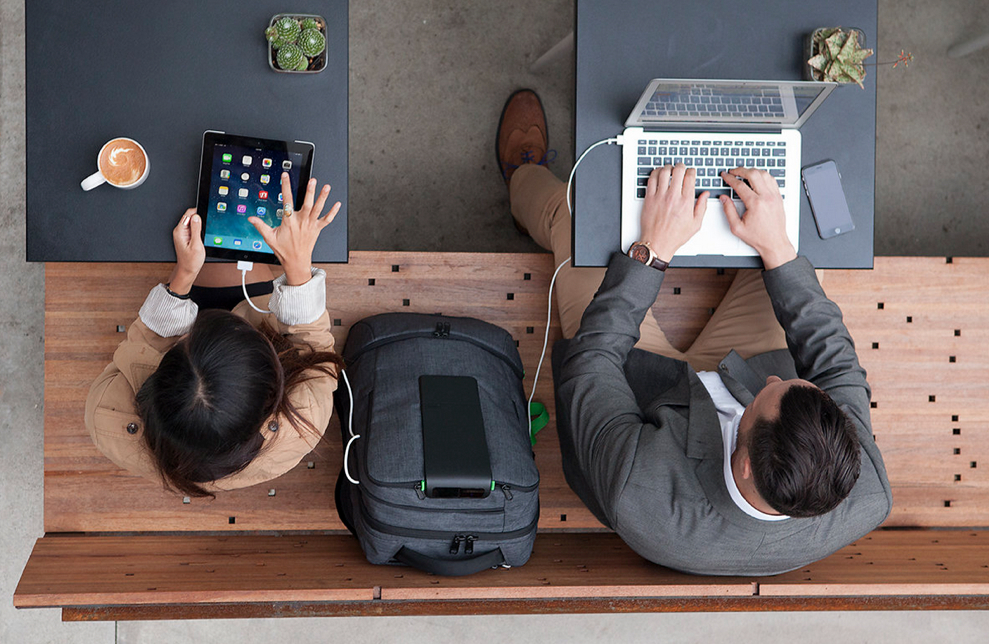 We often see a battery packs seeking funding on Kickstarter or Indiegogo, whether for smartphones, tablets or bigger devices such as laptops. But we don’t think we’ve ever seen a battery that can charge all these gadgets at the same time, which is exactly what AMPL promises to do.

AMPL is much more than just a big battery that can charge a variety of devices. It’s actually a backpack that incorporates various types of battery packs, meaning that you’ll be able to charge smartphones, tablets and a laptop while you’re carrying them around. Furthermore, the backpack has various features you’ll appreciate on your travels that make it, in the company’s words, the “world’s smartest backpack.”

Looking to raise $125,000 by March 4th, the company has already reached $110,000 in pledges in just a couple of days. The cheapest AMPL battery backpack costs $225 on Indiegogo, and should ship by September 2015, though the extra battery packs will have to be purchased separately for certain charging purposes (like charging a laptop).

The TSA-friendly AMPL houses up to four battery packs — one built-in and three that can be added later — and offers six USB connections for charging multiple devices at the same time.

The backpack comes with its own special app that lets users manage how their gadgets are charging and can even offer alerts in case the bag is left behind.

A video demoing the smart bag, and the full press release, follow below.

SAN DIEGO, Calif., Feb. 3, 2015 – AMPL Labs today announced the launch of its Indiegogo campaign to support its innovative AMPL SmartBackpack, the first product of its kind to integrate an advanced portable charging system directly into the fabric of a bag.

The SmartBackpack, which is slated for availability in September 2015 and debuted to rave reviews at the 2015 Consumer Electronics Show, is an intelligent mobile charging system that can power portable electronic devices such as smartphones, tablets — even laptops — while protecting them with a shock-absorbing core and rain-resistant coating.

Its SmartSensors communicate battery levels, internal temperatures and more to the AMPL mobile app, helping consumers monitor and control charging inside the bag without having to open a zipper.

The company has completed the design of the backpack, batteries, and smart-power electronics and has built several working prototypes. With a fundraising goal of $125,000 for the Indiegogo campaign, AMPL Labs is looking to purchase tooling, build a global supply chain and finance the fixed costs of ramping-up production.

“The feedback we’ve received before, during and after the 2015 Consumer Electronics has been overwhelmingly positive,” said AMPL Labs President and CEO Mike Patton. “We want to bring this product to life to help consumers to stop worrying about whether their portable and mobile devices have enough power to get them through the day.”

The Indiegogo campaign features several Perk tiers for consumers looking to support the program, with product-based Perks starting at $50. All Perks are being offered at a significant discount of 25 percent or more off the suggested retail price. The base AMPL SmartBackpack (with an integrated Lithium-Ion 18.5 watt-hour battery) is discounted to $200 (a 33 percent savings off the $299 MSRP) for the first 48 hours of the campaign program.

After the initial 48 hours, contributions for the base bag will be $225, while a bag bundled with two additional Lithium-Ion modular batteries and a SmartInverter for charging any laptop will be $365, (a 32 percent savings off the combined MSRP of $537).

The charging system of the AMPL SmartBackpack is comprised of six USB connections, an internal 18.5 watt-hour (Wh) battery that can recharge a smartphone 2-3 times, and supports up to three optional modular SmartBatteries. The SmartBatteries come in two sizes: TabletBoost (which supplies another 18.5Whs and can charge a smartphone and tablet simultaneously) and LaptopBoost (which adds 55Whs and can charge most laptops directly or through the optional SmartInverter module with an AC outlet, sold separately).

The SmartBackpack communicates with the AMPL Mobile App, allowing consumers to manage the charging-priority of their devices, monitor battery levels, internal temperatures, and even be alerted if they’ve forgotten their bag. Users can also check battery levels and other vital statistics on the OLED display on the front of the bag using capacitive touch-sensitive controls.

In addition to providing power to charge devices on the go, the TSA-friendly backpack protects consumers’ portable electronic gear with a lightweight, shock-absorbing bottom sole, and a water-resistant coating on the exterior fabrics.

The campaign on Indiegogo, the world’s largest global crowdfunding platform, runs from Feb. 3, 2015 through March 4, 2015.

###
About AMPL Labs
AMPL Labs in a seed-stage startup based in San Diego dedicated to empowering consumers with innovative solutions that make mobile life easier. The winner of two 2015 CES Innovation Awards and three additional “Best Of” awards at the show, the AMPL SmartBackpack is the creation of a veteran team of engineers, product designers and marketers, all committed to bringing to market smart products that deliver remarkably satisfying user experiences. For more information, click on http://www.ampl-labs.com.