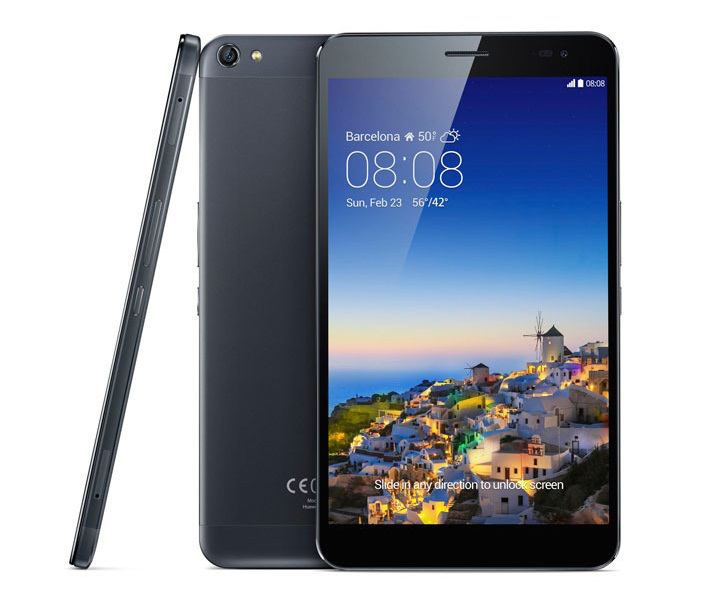 Huawei on Sunday unveiled a couple of tablets at MWC 2014 including the MediaPad X1 and the MediaPad M1, with the former model being described as “the world’s slimmest 7-inch LTE Cat4-enabled all-in-one phablet.” Huawei joins several Android device makers that have announced tablet-like devices that have phone features including Asus and HP.

The MediaPad X1 will launch in various markets including China, Russia, Western Europe, the Middle East, Japan and Latin America starting with March 2014. Pricing details for it aren’t available yet.

The MediaPad M1 is an 8-inch Android budget tablet that will offer an 1280 x 800 IPS display, 1.6GHz quad-core processor, 5-megapixel camera, 1-megapixel front-facing camera, 4800mAh battery, dual front-facing speakers and Android. The tablet has a 7.9mm profile and weighs 329g. Both the MediaPad M1 and the MediaPad X1 will come with LTE Cat4 support (up to 150Mbps download speeds) and dual-mode Wi-Fi support.

The MediaPad M1 will launch in the first quarter of the year in various markets in Europe, the Middle East, China, Japan, Asia Pacific, Australia and Latin America. The tablet does not have a price yet, but should be affordable considering its mid-ranged hardware.

“We’re excited to unveil our new 4G LTE-enabled MediaPads which, together with HUAWEI TalkBand B1, deliver the essential pillars of happiness – health, connection to family, contact with friends and access to work – without boundaries,” said Richard Yu, CEO, Huawei Consumer Business Group. “Huawei’s culture of innovation places us in prime position to develop devices that bring people the benefits and joy of technology through 4G LTE connectivity.”

HUAWEI MediaPad X1 combines the functionality of a smartphone and tablet in a full aluminum alloy unibody, providing outstanding comfort and ease of use at only 239g and 7.18mm thin. Its 7-inch 1200 x 1920 FHD LTPS touch display features a 80% screen-to-body ratio.

HUAWEI TalkBand B1 features wireless calling with a Bluetooth™ 4.1 earpiece, up to seven hours of calls and 1.4-inch flexible OLED display. It supports Android 2.3+ and iOS 5.0+ compatible devices, and syncs effortlessly via NFC.

Weighing just 26g and only 14.6mm thin, TalkBand B1 features a bendable curve design with a removable 9.4g earpiece. The 90 mAh battery lasts for six days and charges in two hours using the USB connector.

The LTE Cat4-enabled MediaPad X1 and M1 download work files in seconds and 1GB movies in one minute with speeds of up to 150 Mbps. In-built WiFi routers and 2.4/5G dual mode WiFi support with voice call and SMS capabilities provide on-the-spot connection. The AirSharing function enables screen sharing and the transfer of images via cloud photo sharing. MediaPads X1 and M1 feature the latest intuitive interface, Emotion UI 2.0, with customizable homescreens, enhanced ‘Standard’ and ‘Simplicity’ UIs and over 1,000 diverse themes.