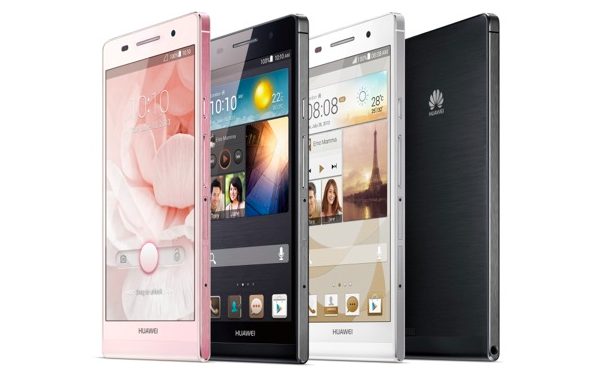 Huawei on Tuesday announced the Ascend P6, the world’s thinnest smartphone. The handset measures a mere 6.18 millimeters thick and weighs 120 grams, eight grams more than Apple’s iPhone 5 despite the fact that the phone is much larger. The Ascend P6 is equipped with a 4.7-inch 720p display, an in-house 1.5GHz quad-core processor and an 8-megapixel rear camera. The smartphone also includes a 5-megapixel front-facing camera, 2GB of RAM, a 2,000 mAh battery, 8GB of internal storage, a microSD slot and Huawei’s Emotion user interface atop Android 4.2.2 Jelly Bean. The Ascend P6 will be available in black, white and pink in China later this month and it will launch on Vodafone, O2 and Orange in Europe in July. Huawei’s press release follows below.

Elegant and edgy, the new HUAWEI Ascend P6 is the world’s slimmest smartphone

At 6.18mm slim, the HUAWEI Ascend P6 is impossibly beautiful and always intuitive

HUAWEI Ascend P6 is ultra slim at 6.18mm and weighs just about 120g. While it is small enough to slip into the tiniest of pockets or clutch bags, the stylish HUAWEI Ascend P6 is designed to be seen and coveted! It features a 1.5GHz quad-core processor, Android 4.2.2 operating system, 2000mAh battery, 4.7-inch HD in-cell LCD screen technology, and ‘MagicTouch’ for enhanced screen responsiveness even when wearing gloves.

As the flagship smartphone of the Huawei Ascend P series, the HUAWEI Ascend P6 embodies a cutting edge design for the fashion conscious. The smartphone’s brushed metallic look with a naturally curved base is both elegant and intuitive. Impossibly beautiful, the Ascend P6 balances fashionable features and user-friendly functions.

The HUAWEI Ascend P6 is even more intuitive and able to be customized with Huawei’s Emotion UI. Inspired by people, for device users worldwide, Huawei has gathered input from over 5 million consumers to help us optimize the latest version of Emotion UI. The proprietary user interface includes updates to Uni-Home including enhanced security, Huawei’s Me Widget, MagicTouch, and SmartReading. New to Huawei’s Emotion UI are the panoramic shoot and facial recognition photography functions.

Huawei’s unique Automated Discontinuous Reception (ADRX) and Quick Power Control (QPC) battery optimization and power saving technology improves performance by more than 30%, compared with smartphone batteries of equal size. With its multi-screen AirSharing capability, you can connect to a range of devices to boost your productivity at work or play by easily sharing documents or enhance your gaming experience with minimal lag time.
The HUAWEI Ascend P6 is available in black, white and pink with matching color cases. It will begin shipping to China from June and to Western Europe from July through Vodafone, Telefonica, Orange, H3G, O2, Carphone Warehouse, TalkTalk, Media Markt & Saturn, TIM and online via Amazon and CDiscount with other markets to follow.