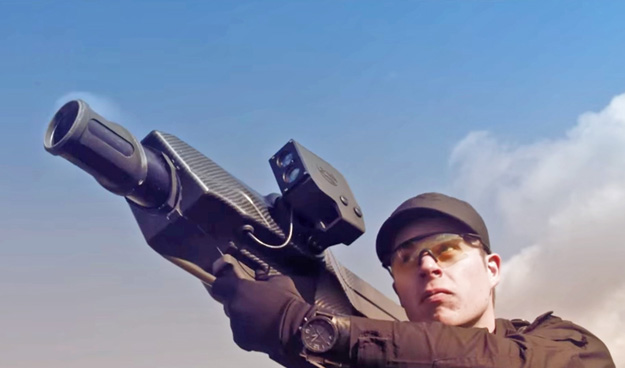 Could this bazooka-style device become a crucial weapon in law enforcement’s battle with drones?

The system, which has a range of 328 feet, uses a high-tech scope to lock on to Unmanned Aerial Vehicles (UAVs). An onboard computer then tracks the target’s flight path and calculates the trajectory required for the projectile to intercept either a hovering or flying drone.

The canister-style projectile opens up when it reaches the drone and uses a net to capture the flying device. The projectile then deploys a parachute to bring the captured drone and the canister components safely back to the ground.

Related: Watch a police eagle take down a drone

OpenWorks Engineering believes that physically capturing a drone can be extremely useful for law enforcement. “Once captured it can be impounded, forensically investigated or simply handed back with some words of education where appropriate,” it explained, in a statement, adding that the risk of damaging the drone is also reduced.

SkyWall 100 will be exhibited at a U.K. government Security and Policing event on March 8. OpenWorks Engineering says that it is working with a number of governments and private organizations around the world and expects to see the first SkyWall 100 systems in use before the end of 2016.

A spokesman for OpenWorks Engineering told FoxNews.com that the system will be demonstrated in Canada in the coming months.

Drones, thanks to their small size and ability to hover low over the ground, can pose a huge security headache, as evidenced last year when a quadcopter drone crashed onto the White House grounds. In 2014 an international soccer game between Serbia and Albania was abandoned after a drone carrying a political banner caused a brawl between players from the two teams.

Technologies touted to combat UAVs include a new breed of ‘interceptor’ drones. Michigan Tech University, for example, has developed an anti-UAV octocopter that uses a net to disable smaller drones.

Police forces are exploring multiple methods to tackle drones. The Dutch National Police, for example, have trained an eagle to take down UAVs.

Related: Can the US military build Star Wars-style laser cannons for its troops?

The U.S. military is also ramping up its anti-drone efforts. In 2014, for example, the Office of Naval Research announced plans to build a laser weapon to shoot down drones.

Last year Boeing demonstrated a laser cannon that could be used to destroy drones.