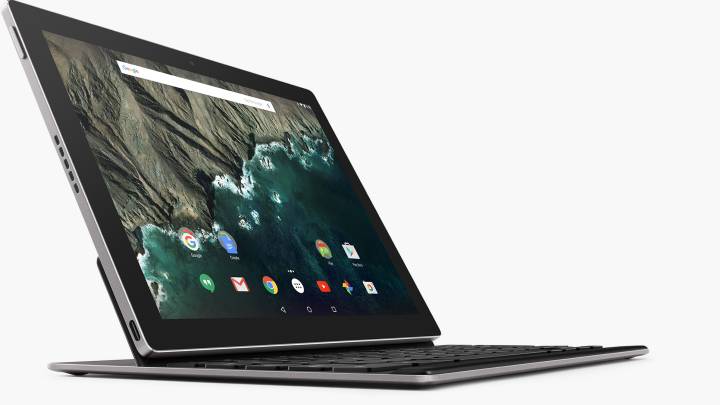 Google might not be as well known for its hardware as it is for its search engine and the incredible apps its brings to mobile platforms, but after unveiling two new Nexus phones as well as two new Chromecast devices, the company took a few minutes to showcase a gorgeous new tablet it’s calling the Pixel C.

This Android device got its name from its stunning display — a 308 ppi screen with 2560 x 1800 resolution, measuring in at 10.2 inches. Internally, the tablet features an Nvidia Tegra Z1 processor with a Maxwell GPU and 3GB of RAM.

But despite the impressive specs, what really caught out eye was the keyboard. Google has built its own custom keyboard for the Pixel C which slides on and off the tablet and connects via magnets. You can adjust it anywhere from 100 to 135 degrees, but unlike other similar keyboards, there’s no kickstand here. It just props itself up.

Google also says that the keyboard connects over Bluetooth to avoid placing any “unsightly contacts” on the tablet itself. When you’re done with the keyboard, you can simply slide it around back and it’ll stay there until you need it. While it’s not being used, the keyboard will inductively charge from the tablet, so you’ll never have to plug it in.

The Pixel C will be available “in time for the holidays” starting at $499. The keyboard will be sold separately for $149.