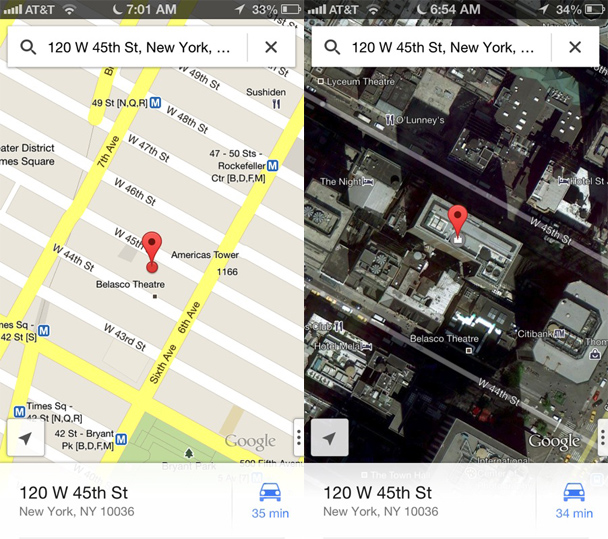 That’s right, iPhone owners — you can finally drop Apple’s (AAPL) awful iOS Maps application in the junk folder on your last app page. Google (GOOG) on Wednesday evening released its third-party Google Maps application for iOS devices including the iPhone and iPod touch running iOS 5.1 and later. And it’s glorious. It doesn’t offer deep iOS integration like Apple’s Maps app does, but it also won’t leave you stranded in the Australian outback to be ravaged by rabid dingos.

The new Google Maps app for the iPhone features a much more minimal interface than its predecessor, and it’s quite refreshing.

The app is incredibly simple: Tap the box to search; swipe up for info or street view; tap the menu button in the bottom-right corner to toggle traffic, public transit and satellite view options; and tap the car icon at the bottom of the screen after a search for directions or to begin turn-by-turn navigation.

We’ve included a gallery above with some screenshots so you can get a feel for the new app, but if you’re an iPhone owner, you probably shouldn’t even bother looking at them. Go to the App Store, download the app, and say goodbye to Apple’s failed (so far) Maps experiment.[bgr-post-bug]