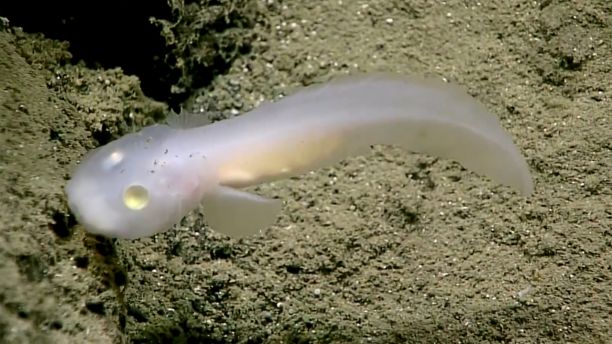 Deep beneath the ocean’s surface, scientists have spotted for the first time a living “ghost fish,” an eel-like creature in the family of Aphyonidae.

The roughly four-inch long fish has eerie white skin and a tadpole-like tail, and was captured on camera on a ridge about 8200 feet underwater in the Pacific.

“I am sure that this is the first time a fish in this family has ever been seen alive,” Bruce Mundy, a fisheries biologist with NOAA, said in the video. “This is really an unusual sighting.”

Mundy added that the find helps scientists answer a question: do these creatures, which have only been found dead before, dwell in the water column, or down near the bottom of the ocean? The video, which was taken during a research mission to the Marianas Trench Marine National Monument and the Northern Mariana Islands by the agency’s ship Okeanos Explorer, suggests the latter, he said.

NOAA said in a statement that fish’s skin has no scales and is “transparent” and “gelatinous.”

Shirley Pomponi, the biology science team lead, compared the ghostly fish to a creature from a classic 1984 movie.

“Our interns think that the fish looks like Falkor, the dragon from the NeverEnding Story,” she said in the video.