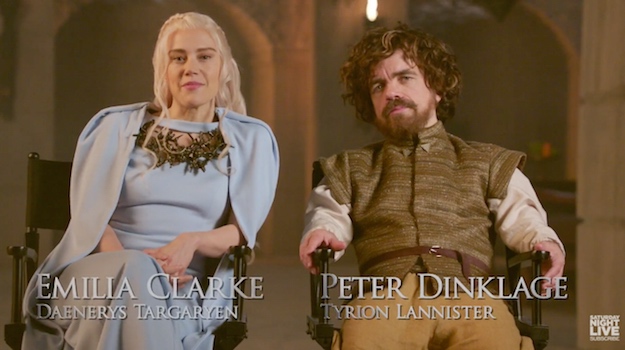 This weekend’s episode of Saturday Night Live was one of the best of the season. Not only did the episode’s many sketches feature a wide variety of different comedic styles, it also provided host Peter Dinklage with the opportunity showcase a bit of his acting range. Whether he was playing a stuffy boss at a magic show, Winnie the Pooh, or even a lounge singer singing about his “space pants”, it was nice to see Dinklage’s full range of acting chops on full display.

But who are we kidding? Most everyone who tuned in to watch SNL this weekend was hoping for at least one sketch featuring Dinklage assuming the role of Tyrion Lannister from Game of Thrones. And thankfully, those prayers were answered.

In the sketch below, we see Dinklage narrating us through a ‘Behind the Scenes’ featurette stylized in a familiar and classic HBO way.

Specifically, Dinklage explains some of the challenges involved in working on the show while also highlighting what it was like to work with dragons for the first time. And did we mention that the dragon is played expertly and hilariously by Bobby Moynihan?

There are so many great Monynihan moments in this sketch it’s hard to pick the best one. Personally, I particularly enjoyed Moynihan’s not-too-subtle attempt to sneak the name of the show into one of the scenes.