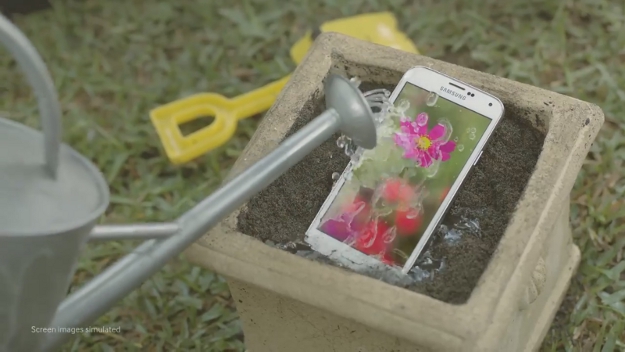 Samsung’s ad blitz for its latest flagship smartphone has begun in earnest and the company is producing TV spots for just about every notable feature of the Galaxy S5. The latest commercial shines a spotlight on the S5’s water and dust resistance, taking direct hits from watering cans, squirt guns, baking powder, a bottle of juice and a few other potentially ruinous substances without sustaining any harm whatsoever.

We’ve already seen third-party torture tests that have literally put the Galaxy S5 through the ringer without causing any permanent damage, so it’s no surprise that Samsung would want to boast about the survivability of the device.

That said, it remains to be seen whether or not the durability of the S5 will give it any major advantage over the upcoming iPhone 6. Just days ago, New York Times columnist Farhad Manjoo proclaimed that water and dust resistance are only minor advantages over the 7-month-old iPhone 5s, recommending that consumers stick with Apple if they’re looking for “the best phone on the market.”

It might not put the Galaxy S5 on top of the sales charts, but there’s no doubt that a significant portion of the market wants a phone that can stand up to the dangers of modern day living. The S5 appears to be that phone. Check out the ad below.