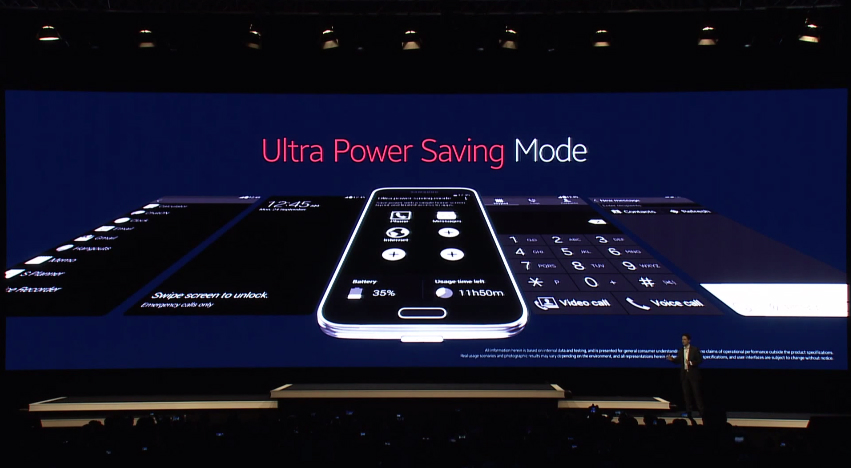 When it announced the Galaxy S5 this week, Samsung pleasantly surprised the audience at MWC 2014 with the phone’s battery performance. The device packs a 2,800 mAh battery that the company claims can deliver 11 hours of video playback or 10 hours of web browsing over LTE. Samsung’s press materials also say that the phone can offer 390 hours of standby time with LTE on, and 21 hours of talk time over WCDMA.

Furthermore, the company unveiled a new software feature for the phone, the Ultra Power Saving Mode that can offer 24 hours of standby time on a 10% battery. With the battery saving mode on, the phone’s display will show only black and white colors and offer access to only a certain set of applications.

But there’s more to the phone’s battery life than the Ultra Power Saving Mode.

Fudzilla reports that Samsung has partnered with Lucid Logic, a company that knows a thing or two about optimizing battery life through software. The company has various battery saving software technologies including WebXtend, NavXtend and GameXtend that can extend battery life on Android devices.

GameXtend offers up to 50% more battery life during game play, with WebXtend and NavXtend each promising up to 25% more battery life for web browsing and GPS/navigation apps, respectively. These technologies intelligently determine the requirements of each type of app, whether it’s a game, browser or GPS app, and optimize power consumption. In addition to extending battery life, Ludid’s battery life software solutions should also reduce the amount of heat the device produces.

At CES 2014, Lucid announced that its GameXtend technology is already found in existing Samsung devices including the Galaxy Note 3 and the Galaxy Note 10.1 and can extend mobile play time on those devices “by adding as much as three additional hours of enjoyment from a single charge.”

Lucid also mentioned testing GameXtend on the Galaxy S4, with significant results. “Lucid has heavily tested GameXtend in a variety of real-life scenarios. For example, the playing time of Angry Birds Rio on a Samsung GALAXY S4 is extended from 4.75 hours to over 8.5 hours, an extra four hours of game play,” the company wrote. “On another platform tested, the total racing time in the title Turbo Racing League is extended from three hours to over five hours, which is over a 66 percent improvement.”

Phone Arena says that Lucid’s software algorithms “have to be implemented at a system level by the manufacturer itself, which is precisely what Samsung has done with the S5.” However, Samsung has not detailed its partnership with Lucid when introducing the Galaxy S5.

Despite Samsung’s battery life claims, the phone’s battery performance in real life situations is yet to be tested.