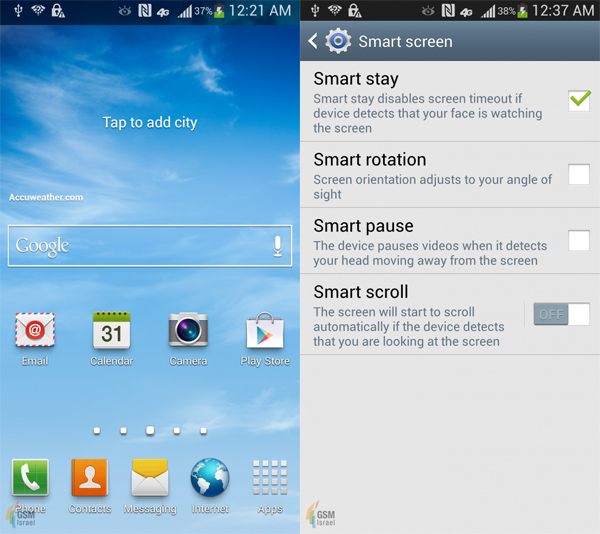 New features Samsung (005930) reportedly plans to include in its next-generation Galaxy S IV smartphone have been revealed in a series of leaked screenshots. The images show various pages within the settings on Samsung’s custom version of Android 4.2.1 Jelly Bean, and they detail some intriguing new functionality coming to the Galaxy S IV as well as an update due to hit Samsung’s current flagship phone, the Galaxy S III.

Two main features are showcased in the leaked images. The first is “Smart Scroll,” which will allow users to scroll through screens on the device’s display automatically as their eyes near the bottom of the screen. Also pictured is “Smart Pause,” which pauses any multimedia playing on the device when the user’s head turns away.

The first set of screenshots published by SamMobile was taken from leaked Galaxy S III firmware, but tech blog GSM Israel subsequently published screenshots from the U.S. version of Samsung’s Galaxy S IV, reaffirming that the functionality pictured will indeed be featured on the Galaxy S IV.

Samsung’s Galaxy S IV is expected to be unveiled during a press conference next Thursday, and BGR will be reporting live from the event. The new flagship phone will reportedly feature a 5-inch full HD Super AMOLED display, an eight-core 1.8GHz processor, up to 64GB of storage, 2GB of RAM, a 13-megapixel camera and Android Jelly Bean.