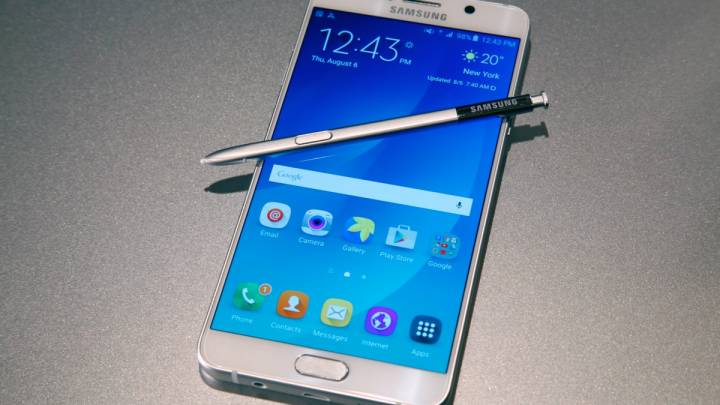 Moments ago, Samsung took the wraps off of its next-generation phablets for 2015. The Galaxy Note 5 and Galaxy S6 edge+ are Samsung’s first phablets made from premium materials that compliment their gorgeous displays and cutting-edge internal components. They’re truly stunning devices, and they can both be considered best-in-class.

The S6 edge+ features an interesting design, just like the S6 edge it’s based on, but it’s clearly the less appealing of the two phones. It’s a Galaxy S6 edge… but bigger. Meanwhile, the Galaxy Note 5 sports a fantastic design and special features that only Samsung’s Note lineup can offer. Despite the fact that Apple’s iPhone 6 Plus is the best-selling phablet in the world, some might say Samsung’s Note lineup offers a superior phablet experience.

Since these are clearly the top two supersized smartphones in the world right now, let’s take a look at five areas where the Galaxy Note 5 has the edge over Apple’s iPhone 6 Plus.

The first item on our list is clearly the most obvious. Samsung’s S Pen stylus is the crown jewel of the Note lineup, and it’s better than it has ever been before on the Galaxy Note 5.

The stylus hardware feels more premium and it has a great assisted eject function when you remove it from the phone. Writing with the new S Pen is also far more accurate and sensitive than it has ever been before.

Beyond that, Samsung added some nifty new software features that make the S Pen even more useful. For example, you can eject the stylus while the phone is asleep and start writing a note on the handset’s display without even waking it.

The iPhone 6 Plus’ full HD display is terrific, but it’s no match for the quad HD screen on Samsung’s Galaxy Note 5. This Super AMOLED panel packs a ridiculous pixel density of 518 ppi, but its quality reaches far beyond pixel count. Colors are shockingly vivid, the contrast is more impressive than any previous Samsung screen, and the clarity is simply amazing.

Specs on paper only tell a small part of the story, as we’ve seen time and time again when Apple’s iPhones are pitted against rivals in performance tests. In the case of the Galaxy Note 5, however, the specs are quite telling.

The phone packs a 14nm octa-core Exynos processor with FinFET architecture, and it’s composed of one 2.1GHz quad-core CPU and one 1.5GHz quad-core CPU. Add in 4GB of bleeding-edge LPDDR4 RAM and you’ve got a killer phablet with power to match its premium aluminum and glass case.

Battery life remains the biggest pain point with smartphones, but it’s not just the time between charges that matters. Also important is how you charge the phone, and how long the phone takes to charge your battery completely.

Samsung has included two types of fast-charging technology in the Galaxy Note 5, and the phone also supports wireless charging for an added layer of convenience. You won’t find any of that in the iPhone 6 Plus.

Apps like Periscope and Meerkat are still buzzing, but it was only a matter of time before the big boys stepped in and crushed them. Well, it doesn’t get much bigger than Google and Samsung.

The Galaxy Note 5 includes a live-streaming feature that is built right into the phone’s camera app. Samsung partnered with YouTube to build the feature, which is viewable on any computer, tablet, smartphone, smart TV, or anything else with a browser that can view a YouTube video.