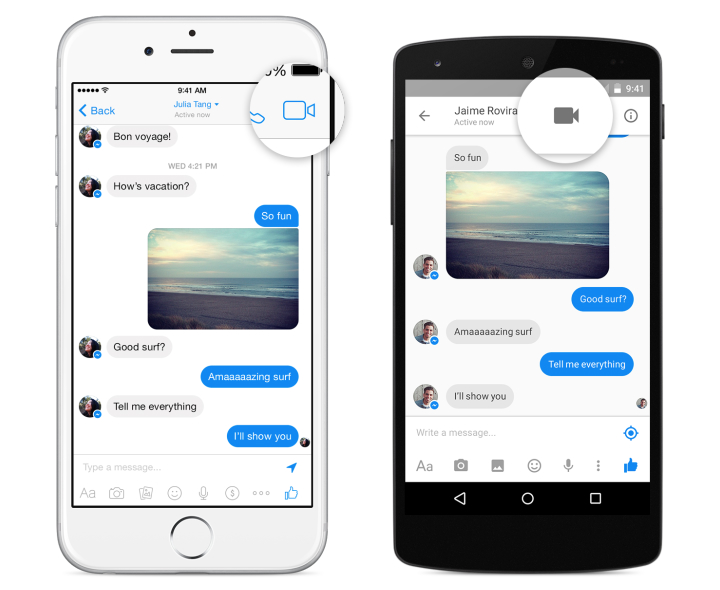 Facebook’s Messenger mobile app is already incredibly popular with both iOS and Android users, so it’s no wonder the company is constantly improving it. One of the features many users may have been asking for, especially those smartphone users who chat with people on other platforms, is finally here.

After WhatsApp, also a Facebook product, received a calling feature on both iOS and Android, Facebook has updated its Messenger app to support video chatting. The feature is definitely not novel since many other chat apps support it, but it’s still a great addition to a widely use messaging system.

“Video calling will expand Messenger’s real-time communication features, enabling the more than 600 million people who use Messenger every month to reach others wherever they are, from anywhere. It’s fast, reliable and high quality,” the company said.

The best thing about Messenger’s new video calling feature is that it lets users quickly set up face-to-face conversations inside an app they already use to communicate across platforms. That means you can easily video call your friends without worrying whether everyone’s on iMessage on iPhone or Hangouts or an Android device.

To initiate a call inside Messenger, simply tap the phone icon in the top-right corner of the screen – that’s a feature that was already available to users. To start a video call, tap on the new camera icon, as seen in the image above on the iPhone (left). Answering a video call once the notification comes in is also easy; just tap the camera icon, as seen on Android in the same image (right).

Initially, only Facebook Messenger users in certain markets will get to use the feature, including Belgium, Canada, Croatia, Denmark, France, Greece, Ireland, Laos, Lithuania, Mexico, Nigeria, Norway, Oman, Poland, Portugal, the UK, the U.S. and Uruguay, with users in other regions set to receive it in the near future.