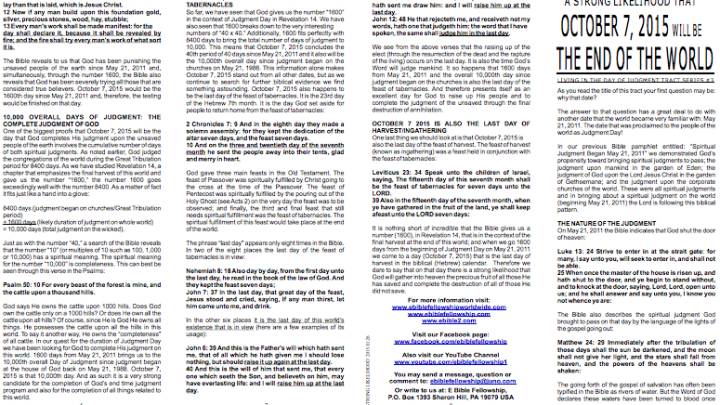 Disappointed that the world escaped the impending doom that was supposed to hit Earth back in May 2011? Not to worry, you still have a chance to experience a doomsday in your lifetime, assuming the most recent prediction is true: the end is near, and it’s happening on Wednesday, October 7th.

Of course, that might not actually happen – after all, not all doom predictions come true – in which case this will be just a regular Wednesday, and I’ll see you all tomorrow. Whatever happens, at least we got to see Microsoft’s “ultimate” Surface Book laptop come to life.

The E-Bible Fellowship says that there’s “strong likelihood that October 7, 2015, will be the end of the world.” And they have a PDF file that explains all the reasons why the world might end today, available at the source link, but you’d be better off ignoring it, and just see what happens out there today.

The E-Bible Fellowship prediction is a revision of the May 21st, 2011 Rapture that never happened. According to the group, that happened to be just the beginning of a 1,600-day judgment period that will culminate with an event that will basically destroy Earth as we know it.

So, get your affairs in order and get ready for whatever it is that happens after doomsday. Me? I’m rather a pessimist who doesn’t want to get his hopes up that this might finally be the real thing. Therefore, I’ll treat October 7th just like a regular Wednesday and run down the clock towards Thursday – obviously, though, in case doomsday comes kicking and screaming, I’ll be there to live blog it.

On a different note, since we’re likely to make it to Thursday, you should know Microsoft will start preorders today for the Surface Pro 4 and Surface Book.